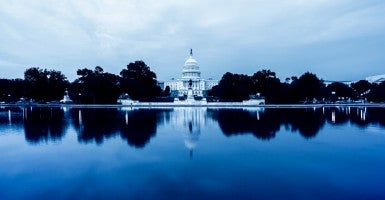 Unions—not Congress or taxpayers—made promises that they cannot keep and the unions—not taxpayers—must be held accountable for those promises. (Photo: iStock Photo)

The administration and congressional Democrats are teaming up to force a taxpayer bailout of private unions’ underfunded and over-promised pension benefits.

On May 6, the Treasury Department rejected a plan by the Central State Teamsters trucking union to reduce some of its pension benefits to prevent the plan from going belly up within a decade. And on May 25, Senate Democrats sent a letter to Senate Majority Leader Mitch McConnell calling for Congress to “protect” the United Mine Workers of America’s health and pension benefits by passing the Miners Protection Act (S.1714), and to “address” troubled union plans like Central State’s.

“Protect” and “address” are code for bailout.

These proposals would bail out select, and politically influential, private-sector union pension plans. Half a billion a year for the United Mine Workers of America or even a couple billion a year for Central State may not seem all that significant, but it would open the bailout floodgates to more than $600 billion in unfunded pension promises across private union plans. And although single employers have far less political clout than the unions, they hold another $800 billion in unfunded pension promises that could fall to taxpayers.

According to the Democrats’ letter, “We [Congress, using taxpayer dollars] have a responsibility to the American people to solve the real problems they face every day.”

But these real problems were caused by reckless and irresponsible union members and pension plan trustees who paid out benefits to workers that didn’t earn them and promised far more in future benefits than they set aside to pay them.

Yet, the Miners Protection Act would give the Mine Workers of America—a select, coal miner’s union pension plan—direct access to nearly half a billion dollars per year in taxpayer funds.

Lawmakers and taxpayers should not be fooled by the fact that those taxpayer dollars would first funnel through the abandoned mine land reclamation fund in hopes of erasing the appearance of a taxpayer bailout.

Despite the fact that the United Mine Workers of America contributes less than 10 percent of incoming revenues to the abandoned mine land fund, it would be given exclusive access to it to cover its unfunded retirees’ pension and health benefits while other coal mining companies would be left in the dark.

With even larger unfunded liabilities, the Central State Teamsters is the other pension plan in play for a taxpayer bailout. The Treasury rejected the plan’s application to reduce benefits so that it could prolong its solvency.

While preventing up to 300,000 pensioners from immediate benefit cuts may have been politically expedient given the November elections, without the proposed reductions or a taxpayer bailout, Central States’ pensioners will eventually face much deeper and widespread cuts in the not-too-distant future. That is, unless Democrats get their way and taxpayers foot the bill.

A bailout of any private pension fund would be pre-emptive. The government already provides a backstop for failed pension benefits through the Pension Benefit Guaranty Corporation, a government agency. If a multiemployer pension fund becomes insolvent, Pension Benefit Guaranty Corporation steps in and pays up to $12,870 per year in insured pension benefits.

This Pension Benefit Guaranty Corporation-guaranteed level would be a big cut in benefits for most pensioners, but cuts could be even greater. The corporation’s multiemployer program is on track to become insolvent within a decade, at which point it could only afford to pay about $1,500 per year, or $125 per month.

Congress should take action now to address multiemployer pensions, but that action should include rules that require multiemployer union pensions to set aside adequate funds to pay promised benefits, and reforms to the Pension Benefit Guaranty Corporation’s multiemployer program to make it operate more like a private insurance company, such as using risk-based premiums and giving PBGC more control over its operations so that its solvency is not dependent on congressional action.