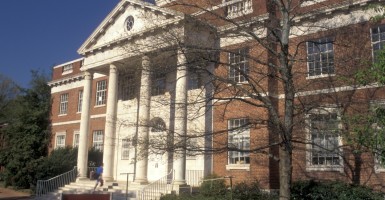 “Because college campuses are a marketplace of ideas, every student from every belief system and standing should have the right to freely express their ideas,” says a student at North Carolina State University. (Photo: Andre Jenny Stock Connection Worldwide/Newscom)

A student-led Christian group filed a lawsuit against North Carolina State University for allegedly restricting their First Amendment rights by demanding they obtain a speech permit.

Hannalee Alrutz, president of Grace Christian Life and a senior at North Carolina State University, told The Daily Signal, “I have witnessed other student groups on campus engaging in conversation freely and not being stopped.”

“Because college campuses are a marketplace of ideas, every student from every belief system and standing should have the right to freely express their ideas,” Alrutz said. “The policy kills our speech. It puts a lot of fear in us so that when we desire to talk to somebody on campus, like a fellow student, there is always, in the back of our mind, a worry that we may be stopped or punished because the policy allows for that.”

In order to make students aware of their activities, Grace Christian Life needed to apply for a permit to set up a table and were told that “without a permit, they must stop approaching other students in the Talley Student Union to engage in religious discussions with them,” according to a Wednesday press release by ADF.

“The only permit required for free speech on a public university campus is the First Amendment,” Langhofer said in a statement, adding that the permits are “unconstitutional restrictions on the free speech of students.”

Despite what they see as the questionable legality of the university’s permit policy, Grace Christian Life members applied for and obtained a permit that allowed them to “speak with other students from behind the table or anywhere in the room.”

When the students stepped out from behind their designated table, a member of the Student Involvement Office made them return to their permitted area.

Controversy ensued when Student Involvement members failed to confront other student groups engaging in conversation and “handing out literature either without a permit or outside of the area reserved by their table permit.” This occurred “sometimes in full view of the same officials that stopped Grace Christian Life from doing the same,” according to ADF’s press release.

North Carolina State University said in a statement provided to The Daily Signal that “NC State believes this lawsuit is both frivolous and without merit. The implication that an organization has been treated differently on our campus because it is a religious group is false.”

In response to the accusation that the university’s speech permit policy was “selectively” enforced among student groups, the university said:

Individuals are of course free to engage others in conversations about their faith on campus. That free speech right is protected by the U.S. Constitution, and NC State not only protects but also defends the right of free speech for this group and all groups committed to the open exchange of ideas regardless of viewpoint.

Following the hearing, Langhofer told The Daily Signal, “I believe that the court’s questions today made it very clear that [the judge] did not believe that the lawsuit was frivolous at all and that there were legitimate and appropriate constitutional concerns with the [university’s speech permit] policy.”

North Carolina State University has been granted until 1 p.m. Friday to respond to ADF’s proposed injunction, giving ADF until midnight to respond to any proposals made by the university. Langhofer told The Daily Signal that he expected a decision from the judge by Saturday.

“I am very pleased with the hearing,” Langhofer said. “The judge expressed grave concerns with the breadth of NC State’s policy. He questioned NC State’s policy at length about why the university felt the students need a permit to talk with one another in the student union.”