Exclusive: Lawmakers Move to Make It Harder for IRS to Seize Money From Innocent People 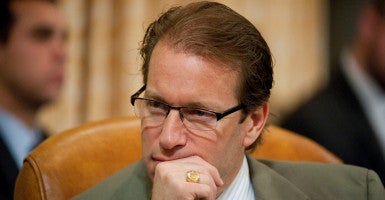 Reps. Peter Roskam, R-Ill., and Joseph Crowley, D-N.Y., are introducing a bill prohibiting the IRS from seizing money from innocent people under civil forfeiture unless the agency proves it's tied to a crime. (Photo: Bill Clark/CQ Roll Call/Newscom)

Roskam and Crowley’s bill, called the Clyde-Hirsch-Sowers Respect Act, prohibits the IRS from seizing money from property owners who allegedly commit structuring violations unless the tax agency proves the money was tied to a crime.

The Clyde-Hirsch-Sowers Respect Act, or the Restraining Excessive Seizure of Property through the Exploitation of Civil Asset Forfeiture Tools Act, codifies policy changes enacted by the IRS and Justice Department in 2014 and 2015, respectively.

The agencies each announced they would no longer pursue structuring cases unless the money was connected to other wrongdoing.

Despite the action from the federal government, opponents of civil forfeiture urged Congress to change existing law to mirror the IRS’s and Justice Department’s policies, which would prevent future administrations or agency heads from rolling back the rules.

In addition to making it more difficult for the federal government to seize money from the bank accounts of innocent Americans, the Respect Act guarantees a neutral judge will hear a civil forfeiture case if the property owner challenges the IRS for the seizure.

The Clyde-Hirsch-Sowers Respect Act is named for Andrew Clyde; brothers Jeffrey, Richard, and Mitch Hirsch; and Randy Sowers—all small business owners who had money seized after the IRS alleged they committed structuring violations.

In each of their cases, neither Clyde, the Hirsch brothers, nor Sowers knew they were doing anything wrong.

Civil forfeiture is a tool that gives law enforcement the authority to seize cash, cars, and property from people if they suspect the property is tied to a crime.

Structuring refers to the act of making consistent cash withdrawals or deposits of just under $10,000 to evade reporting requirements.

Often caught in the civil forfeiture system are innocent small business owners who have money seized by the IRS, yet are unaware their pattern of deposits or transactions is against the law.

According to a 2015 study from the Institute for Justice, a public interest law firm, the IRS forfeited $43 million from property owners in 618 cases from 2007 to 2013. In all of those cases, the tax agency didn’t report any suspicion of criminal activity beyond the pattern of cash deposits or withdrawals.

The Respect Act’s changes to structuring laws mirror those in the Due Process Act, which was introduced by members of the House Judiciary Committee last week and of which Roskam is also a co-sponsor of.