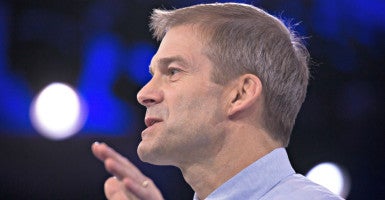 Conservatives are considering a budget compromise that would reduce spending by $30 billion unless the House is able to pass at least 10 appropriations bills.

The “trigger” proposal, first reported by Roll Call, is the latest spending suggestion designed to break a stalemate in the ongoing budget battle. A long shot and a bit of a gamble, the plan requires buy-in from both conservatives and Republican leadership.

There are two steps to the proposal, a Republican Study Committee aide explained to The Daily Signal, noting that the biggest GOP caucus first floated the plan back in February.

“Well, we’re looking at it and we think it has some merit because you pass a budget at the lower number,” Rep. Jim Jordan, R-Ohio, chairman of the House’s conservative Freedom Caucus, told The Daily Signal.

The trigger plan also would return the House to what is known as regular order for spending bills, Jordan noted, when “you actually get into the appropriations process, going bill by bill.”

And, he said, “You get to offer policy initiatives to those pieces of legislation and fight for those things that are important to families and conservatives.”

Conservatives acknowledge the potential risks and rewards of the plan.

Congressional gridlock could slow passage of appropriations bills—something that Jordan acknowledged “could be the outcome”—and lock in a  $1.04 trillion budget. And conversely, newfound efficiency in the House could result in a $1.07 trillion budget.

Another Freedom Caucus leader, Rep. Mark Meadows, R-N.C., told Roll Call that the proposal was “gaining a lot of support among conservative members” and that the potential spending increase “would be a minor exchange for getting back to regular order.”

In an interview Friday with The Daily Signal, Meadows said: “It’s very clear that at this point, we’re not going to get a budget at $1.04 [trillion] unless we do it this way.”

But Rep. Dave Brat, R-Va., a Freedom Caucus member who sits on the Budget Committee, said he has heard little about the trigger plan.

“As usual, there’s a bunch of magic wands waving all over the place with some budget terminology for the D.C. bubble,” Brat told The Daily Signal.

But the Virginia representative said that while he appreciates “the excitement of the idea,” he wouldn’t support the proposal if it ends up adding to the deficit.

“Again, it’s like ‘OK, we did a budget and 10 appropriations bills and the Titanic sank, so it’s the same ending to the story.”

Republican leadership has been locked in a standoff with conservatives over spending since early January.

And a compromise might be too late. Any agreement would need to be retroactive because Congress blew past its April 15 budget deadline. And Appropriations Chairman Hal Rogers, R-Ky., has started moving appropriations bills written to the $1.07 trillion level.

Brat said failed negotiations will impact how the House operates and leadership governs. He praised the commitment of House Speaker Paul Ryan, R-Wis., to regular order.

“But regular order requires you have a vote on the floor, that’s the next step, and we’re skipping that,” Brat said of leadership’s decision to appropriate funds without a budget in place. “The next step is crucial, the next step will determine whether we lose regular order or not. That’s a big deal.”

While the trigger proposal has come up for discussion, the Freedom Caucus and RSC have not taken official positions.

AshLee Strong, a Ryan spokeswoman, declined to comment other than to say that “member discussions about the path forward on the budget continue.”