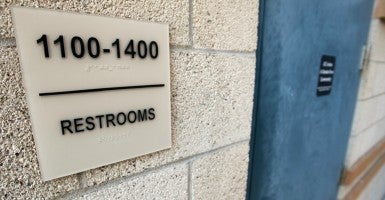 "In our public schools, boys should use the boys’ facilities and girls the girls’ facilities," a Mississippi state representative says. (Photo: David Bro/Zuma Press/Newscom)

A group of Mississippi state lawmakers have joined the governor in calling for a top state education official to reject the Obama administration’s transgender student guidelines or resign.

“Now Obama is threatening our school funding to force his liberal ideologies of immorality on our nation at the expense of our helpless children,” Mississippi state Rep. Robert Foster, R-Hernando, wrote in a statement on his Facebook page, adding:

In our public schools, boys should use the boys’ facilities and girls the girls’ facilities. Single-use bathroom facilities have been available for a long time for people with special circumstances.

“A safe and caring school environment is critical to a student’s ability to learn and achieve,” the statement of the Mississippi Education Department, headed by State Superintendent of Education Carey M. Wright, reads.

Mississippi Gov. Phil Bryant, a Republican, said in a statement on Twitter that the guidelines were “outrageous” and that “Mississippi’s public schools should not participate in the president’s social experiment.”

“Now, at school, your daughters will share their bathrooms and locker rooms with any male that desires to shower with girls,” state Rep. Dana Criswell, R-Olive Branch, wrote on his Facebook page. In another Facebook post, Criswell stated:

If Carey Wright doesn’t reverse her decision to follow Obama, this could be the end of public education in Mississippi.

Eleven state representatives, all Republicans, and seven of whom represent DeSoto County, Mississippi, wrote a letter to Wright on May 17.

“Dr. Wright, if you are unable or unwilling to protect our children by reversing this policy we ask that you step down from your position as leader of our educational system,” the letter says.

The representatives of Desoto County, the State of Mississippi, and [its] citizens stand with Gov. Bryant asking the Mississippi Department of Education to disregard the recent edict handed down by the federal government on school bathroom policy. The demand that all state public schools allow students to use the bathroom and locker room of the “sex they identify as”  is nonbinding, and does not carry the force of law.

The people of this state demand a leader who shares our goals and values and who is willing to protect our children even under pressure from federal agencies to do otherwise. We also expect a swift and public reversal of this decision.

Foster, one of the signers of the letter along with Criswell, wrote on his Facebook page in a memo addressed to the Mississippi Department of Education:

You answer to Gov. Bryant and the elected legislature in Jackson not President Obama in Washington. We will fire every single one of you if we have to. That is not a threat. That is a promise.

99.7 percent of our population understand why boys and girls need to use separate facilities. The 0.3 percent that do not have this figured out yet can use a single use restroom until they figure it out. We are sorry if this inconveniences or embarrasses these few people but life is not fair. Get over it.

A spokesperson for Wright told The Daily Signal that she has no comment on the state representatives’ call for her to withdraw the statement regarding transgender student guidelines.