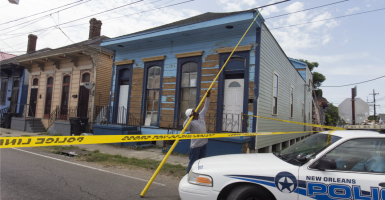 The New Orleans Police Department has a policy to not ask about a person's immigration status. (Photo: Lee Celano/Reuters/Newscom)

Louisiana Republicans and the state’s attorney general are aiming to deter cities and localities from having “sanctuary” immigration policies by threatening to withhold funding from those that do.

While the designation of a “sanctuary city” is informal, it generally refers to jurisdictions where local officials refuse to fulfill requests by U.S. Immigration and Customs Enforcement (ICE) to hold onto suspected illegal immigrants who have been arrested for offenses unrelated to their immigration status.

“Officials who adopt policies like that put their communities at great risk,” state Rep. Valarie Hodges, a Republican, told The Daily Signal in an interview. “It’s contrary to common sense. What other country in the world has those kind of policies?”

By passing two bills earlier this month meant to punish jurisdictions that don’t comply with so-called “detainer” requests, the Louisiana House of Representatives, and its ally in this fight, Attorney General Jeff Landry, injected itself into a contentious debate over sanctuary policies that sprang last year after the murder of 32-year-old Kathryn Steinle in San Francisco.

House Bill 1148 would prevent jurisdictions that Landry deems as sanctuary cities from being able to borrow money from the state for public building projects.

“A sanctuary city sends a message of lawlessness,” said Hodges, who sponsored the bill.

The second bill, 453, would make sanctuary cities compensate crime victims if their attackers were illegal immigrants and law enforcement had contacted those individuals before and not asked about their immigration status.

The state Senate will now consider both measures.

“I support both pieces of common-sense legislation because they would help make Louisiana a safer place,” Landry, the Republican attorney general, told The Daily Signal in an emailed response to questions. “HB 1148 protects taxpayer money from cities that choose to harbor criminal aliens willfully, and HB 453 ensures victims receive justice.”

Landry said that he is aware of two jurisdictions in Louisiana that have policies against complying with detainer requests from the federal government: the New Orleans Police Department and the Lafayette Parish Sheriff’s Office. Because of a 2014 federal appeals court ruling, which said that complying with detainer requests is optional, local jurisdictions are legally free to enact their own policies.

Also, a 1997 Supreme Court ruling in the case Printz v. the United States confirmed that Congress cannot force states to enact or enforce a federal regulatory program, such as ICE’s detainer requests.

Rob Reardon, the director of corrections for the Lafayette Parish Sheriff’s Office, told The Daily Signal in an interview that his agency decided to adopt a policy of noncompliance with detainer requests shortly after the court ruling, in early 2015.

He said his agency received a phone call from the American Civil Liberties Union after the court ruling warning that local sheriff’s departments like his could be sued if they accidently held a U.S. citizen without a warrant.

Reardon said he did not want his jail to hold onto anyone without a warrant issued by a judge. A detainer does not count as a warrant. He said keeping someone at the request of immigration officials could be a civil rights violation, and put the sheriff’s office in a vulnerable position.

“It boils down to this issue of the request to detain which is technically not a legal request,” Reardon said. “It’s interesting the federal government is pushing this on states and now states are pushing this on the county or parish level when ultimately it’s the local level that will have to bear the cost if we get sued.”

Reardon added the sheriff’s office will notify ICE on its own accord when they believe they have an illegal immigrant in custody. As part of its process, officers will ask people they arrest if they are born in the U.S. If the person answers no, Reardon said the sheriff’s office will contact ICE, although officers have no way to verify if the individual is telling the truth about their birthplace.

“To be brutally honest, I think the whole thing — this legislation — is unfortunate,” Reardon said. “We are working with them [ICE], and to be identified as a parish that isn’t [cooperating] is unjust and unfair. The sanctuary city thing is not representative of what we do, and it means nothing.”

New Orleans, meanwhile, would be in a tricky position if the sanctuary city bills went into law.

A federal government-mandated consent decree that New Orleans and the police department entered into in July 2012 specifically dictates policy related to immigration.

As part of the agreement, the policy says that New Orleans Police Department officers cannot ask about a person’s immigration status and that the agency “won’t support immigration enforcement” unless it’s in response to a “direct threat to life or public safety” or when a judge issues a warrant.

Tyler Gamble, the communications director for the New Orleans Police Department, told The Daily Signal in an interview that his agency has held its policy on immigration status for “some time” and the consent decree only clarified how the department was already handling such issues.

“This was our policy prior to the consent decree,” Gamble said, adding that the new, clarified policy was written in collaboration with the Justice Department. “Under our policy, everyone who commits a crime will be held accountable regardless of their immigration status. We are focused on building trust between our officers, and the community, because we need that trust in order to solve crime, and to make feel people safe enough to report crimes.”

Gamble would not say how the department would respond if the two House bills were enacted, but he insisted his agency’s policy is legal.

“We don’t believe we are violating any federal law,” Gamble said. “We do not consider ourselves a sanctuary city. We see immigration as a federal issue, not a local issue, so we are not in the business of immigration enforcement and have not been for some time.”

Hodges, the Republican bill sponsor, insisted her intent is not to “punish” New Orleans for its immigration policy, even if it appears that way.