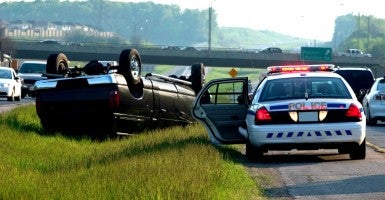 The science is clear and unambiguous—pot is a dangerous substance. It is not like alcohol at all. (Photo: iStock Photos)

Blake Gaston, 23, killed while riding his motorcycle in Seattle. He played the piano, guitar, drums, wrote music, and developed websites.

Elizabeth Kemble, 46, was killed by a car while walking across the street in Portland, Ore. She previously survived three kidney transplants, and dedicated her life to helping dialysis patients and hungry seniors.

Debra Majkut, 34, mother of two, killed while sitting on her couch with three children when a car smashed into her house.

Each person was killed by a person high on marijuana. And it is only going to get worse, given the trend towards increased legalization and liberalization of marijuana laws in the United States.

The traffic safety organization AAA has its own reports on marijuana use among drivers in fatal crashes, and the picture is equally bleak.

And don’t be fooled—the pot pushers are targeting youth with marijuana. Venders sell edibles that look just like other candies routinely eaten by kids. According to the impact report, 98 percent of student drug violations in Seattle Public Schools between September 2013 and May of 2014 were due to marijuana. In 2014, youth under the age of 20 made up 45 percent of Washington Poison Center calls. That number of calls has increased 80 percent between 2012 and the start of the legal market in 2014.

And things in Colorado are just as bad. The black market is thriving, despite the fact that the pot pushers promised that legalization would eliminate the black market. One in six infants and toddlers admitted to Children’s Hospital in Colorado with coughing, wheezing, and other symptoms of bronchitis tested positive for marijuana, according to a study found in the American Academy of Pediatrics.

The science is clear and unambiguous—pot is a dangerous substance. It is not like alcohol at all.

Marijuana use for Colorado youth ages 12 to 17 years old has increased 20 percent since compared to the two-year average prior to legalization, according to the Rocky Mountain High Intensity Drug Trafficking Area report of January 2016. Colorado youth past month use in 2013-14 was 74 percent higher than the national average compared to 39 percent higher in 2011-12. And the data for college-aged students in Colorado is equally disturbing.

As we have written before, legalizing marijuana is terrible public policy.

And now Blake, Elizabeth, Debra, and others are paying for this radical experiment with their lives.

This piece has been updated by the author to state the increase in calls to Washington Poison Center took place between 2012 and the start of legal market in 2014.