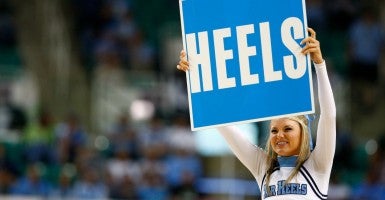 A group of students at the University of North Carolina challenge the Obama administration in a lawsuit supporting the state's so-called bathroom bill. (Photo: Chris Keane/Reuters/Newscom)

A group of students at the University of North Carolina are fighting back against the Obama administration’s civil rights lawsuit against the state this week by filing a lawsuit of their own, alleging that the federal government is forcing them to choose between their educational pursuits and personal privacy.

“Our clients, the students, are between the proverbial rock and a hard place,” Jeremy Tedesco, an attorney for Alliance Defending Freedom, which is representing the students in their case, told The Daily Signal. “They could lose their funding, they could have neutral restrooms and locker rooms—there’s really only two ways this could go and both of them violate their rights.”

“It was not so very long ago that states, including North Carolina, had other signs above restrooms, water fountains, and on public accommodations, keeping people out based on a distinction without a difference,” Lynch said in a press conference on Monday. “We’ve moved beyond those dark days.”

The clients involved in the lawsuit are part of a nonprofit group called North Carolinians for Privacy. The lawsuit alleges that the Obama administration overstepped its bounds in redefining sex and gender in Title IX, and that the students’ constitutional right to privacy would be violated if the state or university concedes to the Justice Department’s demands that they allow transgender students full access to bathrooms opposite from their biological sex.

Also part of the lawsuit are parents and students who attend elementary, middle, and high schools in the state. They are being represented by the Christian nonprofit legal group Alliance Defending Freedom, which could not specify the exact number of students and parents involved.

“Not only will the university lose approximately $1.4 billion in funding, but the students will lose millions and millions of dollars in federal funding to be able to attend,” Tedesco said. “It’s going to completely disrupt their educational pursuits, and their ability to even afford to get an education.”

The transgender bathroom battle in North Carolina was prompted by HB2, called the Bathroom Privacy Act, which took effect on March 23. Lawmakers approved the bill after the city of Charlotte passed an ordinance that allowed individuals to choose public restrooms corresponding with their gender identity, not their biological sex. HB2, also known as the “bathroom bill,” reversed that policy for all government-run facilities, while also prohibiting local governments from making lesbians, gays, bisexuals, and transgender people a protected class of people.

On May 4, the Justice Department then sent a letter to Gov. Pat McCrory, a Republican, accusing the state of “engaging in a pattern or practice of discrimination against transgender state employees.”

The University of North Carolina received a similar letter, and had until Monday to respond.

“Our first responsibility as a university is to serve our students, faculty, and staff and provide a welcoming and safe place for all,” Spellings said in a written statement. “The university takes its obligation to comply with federal non-discrimination laws very seriously. We also must adhere to laws duly enacted by the state’s General Assembly and governor, however. HB2 remains the law of the state, and the university has no independent power to change that legal reality.”

Tedesco said for his clients, a capitulation by the university means gender-neutral locker rooms, restrooms, and changing areas at the school.

“Our student plaintiffs object to that scenario as well, and that’s the very scenario the Obama administration is trying to force on the school and the state through its lawsuit,” he said.

The lawsuit was filed in the Eastern District of North Carolina, which is the same court that McCrory also filed a lawsuit against the Justice Department in on Monday.