The Myth That Regulation Can Stop Financial Crises 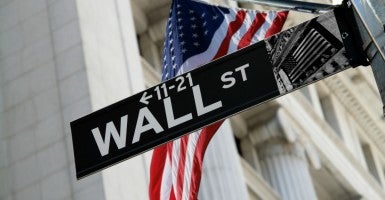 Dodd-Frank is stifling the economy and personal financial choice, yet as of 2015, roughly 40 percent of the rules required by this legislation have yet to be finalized. (Photo: iStock Photos)

Born from the myth that deregulated markets caused the 2008 crisis, Dodd-Frank inserts the federal government into virtually all components of the financial sector. The legislation polices everything from derivatives markets to payday lending, and it has (so far) burdened the U.S. economy with thousands of pages of rules.

Unsurprisingly, these overbearing regulations stifle economic growth. Meanwhile, the causes of the last crisis have not been addressed and the number of too big to fail firms has increased. After witnessing sluggish economic recovery and alarming trends towards overregulation, experts have come together to present the case against Dodd-Frank.

>>> To Read The Heritage Foundation’s: The Case Against Dodd-Frank: How the “Consumer Protection” Law Endangers Americans

This new report—a collaborative effort between scholars at The Heritage Foundation, the American Enterprise Institute, the Cato Institute, and the Mercatus Center—uses free market principals to identify the problems with Dodd-Frank and offer alternative solutions. Dodd-Frank largely ignored the underlying causes of the 2008 crisis and implemented policies that exacerbate those causes. Here are three major reforms needed in the wake of the Dodd-Frank Act becoming law:

Dodd-Frank is stifling the economy and personal financial choice, yet as of 2015, roughly 40 percent of the rules required by this legislation have yet to be finalized. Congress must decide whether to keep compounding problems brought on by Dodd-Frank, or to enact practical and effective solutions for better U.S. financial markets. This book offers practical alternatives to the misguided solutions found throughout Dodd-Frank.