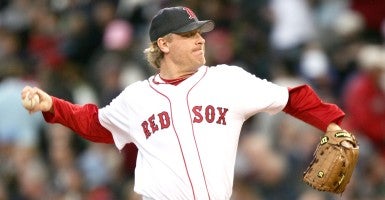 In the bad old days of the Soviet Union, Stalin, Brezhnev and the rest would literally airbrush out of photographs those who fell out of favor. Killing them and sending family members to Siberia did not suffice; they had to be erased from collective memory.

In this famous photograph, commissars who were killed or were no longer of use were removed in the dark room one by one until Stalin was left alone at the end, finally satisfied.

Now along comes ESPN airbrushing a game played by former Red Sox great Curt Schilling out of a recent broadcast of a documentary on the 2004 American League Championship Series. Unless you have been vacationing in Mars, you know that Schilling was until recently an ESPN broadcaster.

Until, that is, he dared say that men should not be allowed into women’s bathrooms, no matter how much they regretted that Y chromosome with which they were born and can never part.

Now, to wade into this topic requires several stipulations right off the bat, to coin a phrase.

Stipulation One: Curt Schilling did not express his opposition to same-sex bathrooms in the most elegant of ways. The meme he chose to display on his Facebook page was crude and demeaning.

Stipulation Two: On the other hand, Schilling, whatever one might think of his view (and there are good Americans on both sides), was right on the science, which liberals claim to love so much. As Wall Street Journal columnist Bill McGurn put it recently:

Mr. Schilling’s main contention—‘a man is a man no matter what they call themselves’—is supported by DNA and those pesky X and Y chromosomes. In short, in this fight between science and authority, Mr. Schilling is in the amusing position of being the Galileo, with ESPN filling in for the Holy Office.

Stipulation Three: ESPN is a private company and has every right to live according to its own principles (just like Christian bakers, to name a random group of professionals). It even has every right to airbrush Schilling out of its own account of history, or ever show his face again.

ESPN, in other words, is not infringing on freedom of speech, which is what the left would say if the Birkenstock were on the other foot.

The thing is, everyone else also has a right to address those viewers, whose numbers have already been dwindling, and point out to them just what ESPN has done. The company has put out a statement in which it said it had edited out the segment because a program had run too long.

“When a live event runs long,” said the statement. “It’s standard procedure to shorten a taped program that follows.”

To judge that statement one should consider what ESPN edited out. For ESPN did not leave out just any game—it cut out the “Bloody Sock” game, one of the most heroic performances in recent baseball history, if not in the three-century history of the game.

Pitching at Yankee Stadium for the Red Sox, who had not won a World Series for 86 years up to that point, Schilling won a decisive victory a day after doctors had sutured a loose tendon back into the skin. His ankle began to bleed, soaking the sock, but still Schilling pitched seven innings through pain and blood, as the camera focused on his ankle and his performance.

Against all odds, the Red Sox went on to defeat the Yankees in seven games after being down 0-3 (the only team to have ever done that) and swept the Cardinals in four games, overcoming the 86-year curse. In an age when heroics are such a reproach to cupcakes who prefer easy living that our schools teach our children to despise the concept, Schilling’s performance was a throwback to an earlier era, to Gehrig, DiMaggio and Jackie Robinson.

And ESPN left this game out of a documentary, “Four Days in October,” which purports to chronicle that comeback?

One can find ESPN’s explanation dubious, or one can find that true. Some of those who believe the former may decide to vote with their clickers.

The retailer Target has suffered recently after announcing a new policy that will allow visitors to use the bathroom that best aligns with the sex they believe they are. A boycott has already garnered more than a million signatures and stock prices have dropped.

But it will not be any better for those who believe ESPN’s explanation, for then the ESPN editors know very little baseball. The broadcaster may be in a lose-lose.

Speaking of losing, there is Stipulation Four: If anyone has a right to want the Bloody Sock game to be airbrushed not just out of records, but out of all of history outright, it is someone who this year celebrates 40 years as a Yankee fan, an attachment forged in the glorious summer of 1976, Billy Martin’s first full season as manager.