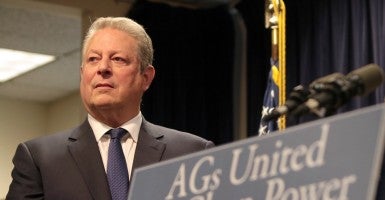 In the week prior to the administration signing what should constitute an international climate treaty, one think tank, the Competitive Enterprise Institute, was subpoenaed for casting doubt on the agreement’s associated science of climate catastrophe.

As disturbing as such thuggery from state attorneys general would be in any case, the premise of the subpoena is faulty. The Competitive Enterprise Institute did not cast doubt on the dubious climate science. The actual data cast the doubt. The think tank and others have simply pointed out what the data show.

It looks like thoughtcrime has now moved from George Orwell’s novel “1984” to the twisted reality of our judicial system. Pointing out facts should never be a real crime.

The Heritage Foundation’s new Paris-bubble-popping science summary is also a case of letting the numbers tell a story. A story many never hear in the media-hyped spectacle that is international climate policy. For instance, the chart above shows reconstructed average world temperature data for the past 500,000 years. Depending on the magnification and size of your monitor, each pencil dot would span something on the order of 1,000 years. The myriad 10-degree Celsius temperature flips all happened before man-made carbon dioxide could have had any impact—the final temperature spike started at the end of the last ice age.

A question some overzealous attorneys general might be asking right now is, “Where did this ‘denier’ data come from?” The answer is: the National Oceanic and Atmospheric Administration’s National Climatic Data Center website (to be very clear, it is part of the federal government).

If those who merely point to data that are inconsistent with an imminent climate crisis are thought criminals, how much more subpoena worthy would be those who actually created the data? This expands the thoughtcrime conspiracy to an entirely new set of perps.

Should the hyperventilating attorneys general subpoena the National Oceanic and Atmospheric Administration in its entirety or just the researchers? If donors to think tanks are subpoenaed simply because the think tanks pointed to this data, should not the U.S. Treasury be subpoenaed for actually funding these doubt-creating data?

In any event, it seems disingenuous to wave off huge past temperature changes as entirely natural while branding as science-denying fraudsters those who assert that natural forces are likely still to be playing a significant role. This is a problem for the U.N. Climate Agreement and its signers.