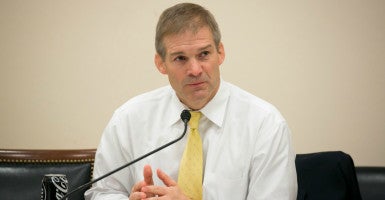 Rep. Jim Jordan, R-Ohio, believes that conservatives should have the chance to put forth controversial amendments attached to spending bills if the House moves on the "regular order" appropriations process this year. (Photo: Paul Morse for The Daily Signal)

The chairman of the House Freedom Caucus said Wednesday that Republicans should be able to put forth “conservative policy riders” to appropriation bills.

“If we really are about quote ‘regular order’ then that means the ability to offer amendments and push for those policy changes that we think make sense,” Rep. Jim Jordan, R-Ohio, told The Daily Signal in an interview.

Even though the House has failed to pass a budget, Speaker Paul Ryan, R-Wis., reaffirmed his support Wednesday for moving on spending bills this year, fulfilling one of his goals to pursue “regular order.”

“We will have a functioning appropriations process this year,” Ryan told reporters, according to Politico.

Beginning on May 15, the House can proceed on appropriations bills funding the government’s different departments, even without adopting a budget.

Ryan had hoped to pass a budget that would stick to spending levels negotiated in a deal last year between former Speaker John Boehner and President Barack Obama.

The House Budget Committee passed a budget resolution that sets total government discretionary spending at $1.07 trillion—as the Boehner-Obama deal called for—but it did not have enough conservative support to go before the full House.

Now, the House is preparing to move on spending bills without a budget.

House Appropriations Chairman Hal Rogers said Wednesday that the Military Construction-Veterans Affairs appropriations bill is “probably” the first spending bill that will make it to the House floor.

Meanwhile, the Senate this week is already considering its first appropriations bill for 2016.

Seeking a drama-free appropriations process, Senate leaders have pledged to pursue spending bills free of “controversial” riders. Moving a $37.5 billion energy and water spending bill this week was supposed to be the first step in that effort. But that plan was upended Wednesday after Democrats blocked a cloture vote to end debate on the spending bill because Sen. Tom Cotton, R-Ark., offered a “poison pill” amendment related to the Obama administration’s Iran policy.

Cotton’s amendment would bar “the use of funds to purchase heavy water produced in Iran.” The Obama administration announced last week that it was purchasing “heavy water” from Iran to prevent the material from being used in atomic-weapons development.

Senate Majority Leader Mitch McConnell, R-Ky., described the failure to advance the energy and water spending bill as a “snag” and expressed optimism that the parties would resolve the issue.

Jordan, meanwhile, said the Senate’s actions won’t impact how he approaches the House’s pursuit of appropriations bills. Conservatives believe that attaching amendments—or policy riders—to the spending bills is a way to fulfill priorities such as blocking funding for programs they don’t like. The Obama administration, Democrats, and some Republican leaders believe such amendments bog down what should be an orderly process to fund the government.