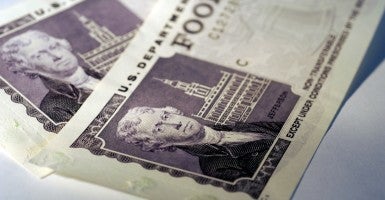 Elmore Wallace is a member of the Young Leaders Program at The Heritage Foundation.

Abraham Lincoln once said, “No country can sustain, in idleness, more than a small percentage of its numbers. The great majority must labor at something productive.”

Over the past several years, the number of Americans on food stamps has soared. In particular, since 2009, the number of “able-bodied-adults” without dependents receiving food stamps more than doubled nationally. Part of this increase is due to a federal rule that allowed states to waive food stamps’ modest work requirement. However, states such as Kansas and Maine chose to reinstate work requirements. Comparing and contrasting the two approaches provides powerful new evidence about the effectiveness of work.

Once work requirements were established, thousands of food stamp recipients moved into the workforce, promoting income gains and a decrease in poverty. Forty percent of the individuals who left the food stamp ranks found employment within three months, and about 60 percent found employment within a year. They saw an average income increase of 127 percent. Half of those who left the rolls and are working have earnings above the poverty level. Even many of those who stayed on food stamps saw their income increase significantly.

Work programs provide opportunities such as job training and employment search services. For example, in Kansas, workfare helped one man, who was unemployed for four years and on food stamps, find employment in the publishing industry where he now earns $45,000 annually. Another Kansan who was also previously unemployed and dependent on food stamps for over three years, now has an annual income of $34,000.

Furthermore, with the implementation of the work requirement in Kansas, the caseload dropped by 75 percent. Previously, Kansas was spending $5.5 million per month on food stamp benefits for able-bodied adults; it now spends $1.2 million.

Maine is another powerful example in favor of work over dependency. Similarly to Kansas, Maine saw a major decline in its caseload after instituting a work requirement. Within the first three months after Maine’s work policy went into effect, its caseload of able-bodied adults receiving food stamps plunged by 80 percent, falling from 13,332 recipients in December 2014 to 2,678 in March 2015.

Providing assistance to help those in need does not have to be a one-way handout. According to a Heritage Foundation survey, Americans overwhelmingly agree that able-bodied adults receiving welfare should work. However, very few of the federal government’s 80 means-tested welfare programs require recipients to work for benefits.

One of the best ways to ensure that welfare does not become a trap is to initiate reform based on the principles of work and personal responsibility. As the examples of Kansas and Maine show, good public policy can help encourage individuals towards self-sufficiency and better lives.