China Flexes Its Military Muscles While America Does Nothing 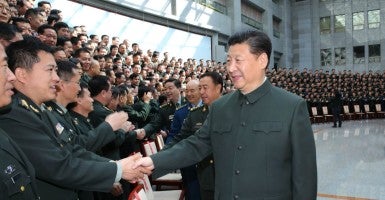 In the last few days, China has undertaken several new military actions. These include landing a military aircraft on one of their new artificial islands in the South China Sea, a visit by Chinese President Xi Jinping to a newly established military headquarters, and testing a new ICBM. The purpose is simple: To send messages to the rest of the world:

As the Chinese have been putting the finishing touches on their artificial islands, they have been emphasizing the ability to land large aircraft on the runways placed on those islands.

They have already landed commercial airliners on the 3,000-meter runway on Fiery Cross Reef—a runway long enough to handle B-52s. Now, they have landed military aircraft, as a reminder that these islands are Chinese territory, where China can act as it sees fit.

This landing occurred even as Xi Jinping was visiting a new “joint operations command center.” These command centers are part of the overhaul of the Chinese military. They are part of the transition from seven “military regions (junqu)” to five “war zone commands (zhanqu),” which will also see the permanent establishment of joint operations command headquarters, such as the center Xi visited.

Reflecting the prominence of these new joint operations commands, Xi was described in Chinese press releases as “CCP General Secretary, National president, Central Military Commission Chairman, and Military Committee/Commission Joint Command Overall Commander.” (Emphasis added.) This last title is brand new, and appears to have been added for the occasion.

Since Xi, as chairman of the CMC, is already essentially the commander-in-chief of the Chinese military, the addition of this title is superfluous, insofar as it describes his roles. But including it in his list of titles does serve as a reminder to the People’s Liberation Army (PLA) of the importance of these new joint headquarters. The use of joint headquarters is no longer temporary; instead, like the war zones, these are now permanent establishments, compelling the Chinese services to interact with each other regularly and extensively.

Similarly, the apparent test of a DF-41 ICBM, complete with multiple independent re-entry vehicles (MIRVs), over the South China Sea serves multiple ends. Most obviously, it tests a new missile with a new warhead configuration. Until now, China has not deployed MIRVs, and is still apparently working on the DF-41. But by testing in the South China Sea, and blandly restating that these are “within China’s boundaries,” Beijing reiterates its claim to the region.

Finally, as part of the major overhaul, the Chinese nuclear forces have been elevated from a “super-branch,” known as the Second Artillery, to a full-blown service, the PLA Rocket Forces (PLARF). The prompt employment of PLARF assets in political signaling, like Xi’s visit to a joint operations command center, is likely aimed at reminding both foreign and domestic audiences of the PLARF’s new status.

Message Neither Received nor Understood in the White House

Meanwhile, the United States continues to demonstrate its utter lack of resolve. Efforts by the Navy and the Pacific Command to respond more assertively have apparently been muzzled by the White House. National Security Advisor Susan Rice and President Obama clearly feel that getting the Chinese to sign the Paris agreement on climate change matters more than mere ICBM tests and island-building. The relative threat posed by the former clearly eclipses the latter, from the Oval Office’s perspective.

The Chinese ICBM test occurs even as the Department of Defense insists on inviting the Chinese navy to participate in RIMPAC 2016—the world’s largest international maritime warfare exercise. It would seem that the experience from the last RIMPAC, where China showed up with intelligence gathering ships as well as its official delegation, only whetted the appetite of those intent on engaging the PLA.

The PACOM commander of the time, Admiral Samuel Locklear, even argued that the dispatch of Chinese intel-gathering ships was a feature, since it would show that China accepted international rules regarding freedom of the seas!

Similarly, while Beijing continues to strengthen its grip on the South China Seas, the United States continues to send mixed messages through its FONOPS program, which was designed to maintain freedom of the seas.. After three years of not sending ships to the disputed areas around the Spratly Islands (and only admitting this absence under repeated, persistent questioning by Congress), the Department of Defense has conducted three FONOPs, two of which were actually “innocent passage.”

While Secretary of Defense Carter keeps insisting that the US will “go where we want, when we want,” in reality, the United States has still avoided actually conducting military activities of any sort off the Chinese man-made islands, despite there being no legal reason not to do so.

Most recently, the USS John Stennis battlegroup has been touted as operating in the South China Sea. As with the transit of the USS Lassen last fall, though, the refusal of Department of Defense to indicate exactly where the carrier group conducted its activities should raise doubts about the actual actions undertaken (and therefore what message was actually sent).

Beijing is sending its messages as loudly as it can, but for this administration, there are few so deaf as those who will not hear.