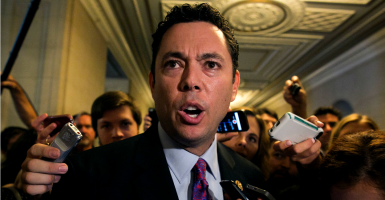 The chairman of the House Oversight and Government Reform Committee wants Congress to impeach wayward government agents more often, and he’d like GOP leadership to start with Commissioner of Internal Revenue John Koskinen.

In an interview with The Daily Signal, Rep. Jason Chaffetz, R-Utah, likened impeachment “to a muscle that has atrophied over time,” and said he wants to “Get that muscle working again—this should be a common occurrence, this shouldn’t be once in a century.”

Chaffetz believes impeachment is within Congress’ Constitutional authority. “This was the safety valve,” he explained, “for somebody who’s not serving the best interest of the United States of America.”

Congress has only impeached 19 federal officials in its history. The last impeached executive agent forced out of office was United States Secretary of War, William Belknap, in 1876 over charges of corruption.

More recently Chaffetz has led the charge to impeach Koskinen, saying he obstructed the congressional investigation into the agency’s targeting of conservative groups. Chaffetz drew up impeachment articles for the taxman last October and directed his staff to hand deliver the papers to each member of Congress. Last year, the Treasury Department issued a statement backing Koskinen, saying that “Commissioner Koskinen is a man of the highest integrity with a steadfast commitment to public service during difficult times,” per the Associated Press.

But so far, House Speaker Paul Ryan, R-Wis., has hesitated to give Koskinen the boot. At a press conference last week, Ryan told reporters he’d rather wait until after the election to fire the top tax agent.

“There’s always an election,” Chaffetz said, expressing frustration with Ryan’s decision to punt on the issue.

“Even the speaker complains about the management of the IRS,” Chaffetz said, pointing to Ryan’s most recent comment on the issue. “Well, we can actually do something about it other than a YouTube video. So, that’s what I’d like to do.”

Last Thursday, members of the Freedom Caucus called for impeachment of Koskinen directly from the House floor and protested leadership’s hesitancy to act on the impeachment articles.