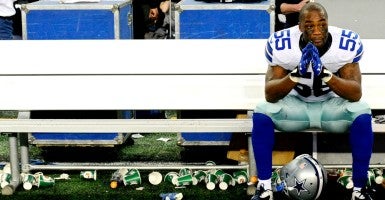 The NFL threatened to pull Atlanta from consideration as a Super Bowl host if a religious liberty bill became law in Georgia. (Photo of the Dallas Cowboys' Rolando McClain: Larry W. Smith/EPA/Newscom)

Don’t look now, but if you live in a state that stands up for the First Amendment, your favorite sport may be boycotting a town near you.

In March, the National Football League threatened to pull the city of Atlanta from consideration as host of future Super Bowls if Georgia Gov. Nathan Deal signed a religious liberty bill into law.

“NFL policies emphasize tolerance and inclusiveness, and prohibit discrimination based on age, gender, race, religion, sexual orientation, or any other improper standard,” said an NFL spokesman.

So, apparently, it’s now “improper” to hold the religious belief that marriage is between a man and woman. Furthermore, if you hold that belief, you don’t qualify for “tolerance” and should be punished by the government if you as a religious individual or organization seek to live out your beliefs.

So, apparently, it’s now “improper” to hold the religious belief that marriage is between a man and woman.

Here’s the reality: The Georgia legislation did not take rights away from anyone. As a matter of fact, had Deal not vetoed the bill, the NFL would have been completely free to feature a same-sex wedding on the 50-yard line during a Super Bowl halftime show if they chose to do so.

The law simply would have protected a minister or a church from being forced to hold such a wedding on their property if they oppose it on religious grounds.

But the “do it our way or we’ll take our ball elsewhere” bullying doesn’t stop with football.

North Carolina has found itself in the crosshairs of the National Basketball Association and U.S. Soccer for passing a law that simply says that when using public bathrooms, people must use the one that correlates with their biological sex—men must use the men’s bathroom, and women must use the women’s bathroom. If someone is transgender, until he or she has officially “transformed” to the opposite sex, he or she must use the bathroom of the sex with which he was biologically born.

That commonsense measure left the NBA wringing its hands, saying it is “deeply concerned” and “doesn’t know what impact it will have on its ability to successfully host the 2017 All-Star Game in Charlotte.”

What? How on Earth is protecting little girls and women from potential male predators who would take advantage of access to women’s bathrooms “deeply concerning”?

As my Heritage colleague Ryan Anderson points out, the NBA has no problem separating men and women when it suits the organization’s needs. “The NBA (and its sister organization, the WNBA) apparently think bathroom access shouldn’t be based on biology, but basketball leagues should,” writes Anderson.

And then there is the U.S. Soccer Federation, which says it may not hold future games or events in North Carolina because they think the law is discriminatory. Interestingly, the USSF is dealing with its own discrimination charges from female players who say they are not paid fairly compared to male players.

U.S. Soccer claims that men’s soccer produces more revenue, attendance, and TV ratings. To be clear, I’m not for “equal pay” just for the sake of equal pay.

The Women’s World Cup last summer broke TV ratings records in this country—for a men’s or women’s soccer game—with over 25 million viewers. Perhaps the USSF should focus on sorting out its own “gender” issues.

The truth is that America’s major sports associations have been cozying up to the LGBT community for some time. The United States Tennis Association, the NFL, and most recently Major League Baseball have all signed deals with the National Gay & Lesbian Chamber of Commerce to include bids from LGBT-owned businesses as part of their commitment to support “minority-owned” businesses.

Applauding such partnerships, the founder of the National Gay & Lesbian Chamber of Commerce told Fortune, “Anyone that shuts off one group for another really is doing a disservice to themselves, to their fans, to their shareholders, and to their bottom line.”

But apparently there is one group of people these sports associations have decided it is OK to shut out: those who hold and want to live out the tenets of their faith. That’s a disservice to far more than a city’s or state’s bottom line. It’s a violation of religious freedom and free speech—in fact, it’s a violation of the First Amendment.