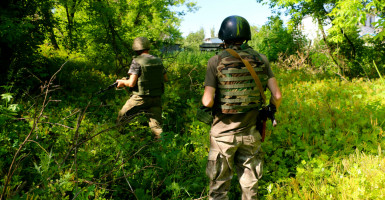 KYIV, Ukraine—The Ukraine war is going into its third year, and leaders in Washington and Kyiv are bracing for the possibility that Russian military brinkmanship may be the new status quo in Eastern Europe.

In Ukraine, some worry the time soon may be ripe for an uptick in the Russian-backed war in the eastern part of the nation.

Warm summer weather and the end of the “mud season”—as waterlogged ground from melting snow and spring rains dries—is historically the time for military offensives in the region, dating from Napoleon’s march to Moscow and Hitler’s invasion of the Soviet Union.

But modern concerns about a summer offensive have more to do with geopolitics than the weather. “Russia is trying to multiply conflicts,” Mykhailo Samus, deputy director of the Center for Army, Conversion and Disarmament Studies, a Ukrainian think tank, said in an interview with The Daily Signal.

“More conflicts are better for Putin and worse for the West,” Samus said.

Since Russia’s surprise move to cut back its presence in Syria, the Ukrainian military has released several intelligence reports predicting a Russian-backed military offensive in Ukraine this summer.

At the Ukraine Crisis Media Center in Kyiv, military representatives continue to issue daily updates on the ongoing war. The press briefings include Ukrainian military casualty reports and information about the ongoing flow of Russian weapons and troops into separatist territories. Weapons of 100 mm caliber and higher are banned from the front lines in Ukraine, according to the rules of the cease-fire.

On April 2, the Ukrainian military reported another Russian shipment of war materiel to the twin separatist republics, including 15 tanks and seven trucks with ammunition.

The report could not be independently confirmed, and Russia continues to deny arming Ukrainian separatists or sending Russian military personnel to participate in the conflict.

The Ukrainian military is not the only group trumpeting warnings about a potential spike in the war.

For weeks, international monitors have reported a slight increase in cease-fire violations around the separatist stronghold of Donetsk in eastern Ukraine, as well as sporadic fighting along the length of the 200-mile-long front lines in Ukraine’s southeastern Donbas region, which borders Russia.

The Organization for Security and Cooperation in Europe (OSCE), which is headquartered in Vienna, is the multinational group responsible for monitoring the Ukraine cease-fire.

Teams of OSCE monitors in telltale blue and white body armor and helmets plod along the potholed roads in Donbas in white SUVs. Their mission is to monitor the battlefield for cease-fire violations—which include artillery shots, tank shots, rocket attacks, and small arms fire.

The OSCE also inventories heavy weapons on both sides of the conflict. According to the terms of the February 2015 cease-fire, weapons of 100 mm caliber and higher are supposed to be stored in locations at prescribed minimum distances from the contact line.

The work of the OSCE monitoring teams is difficult, often placing them in harm’s way. Monitors frequently say they are turned back at separatist checkpoints, denying them access to key spots on the battlefield.

Some in Kyiv claim that the presence of Russians on the OSCE monitoring teams compromises the objectivity of the group’s reports—a charge the organization denies.

Despite the challenges, the teams produce reports almost daily on the Ukraine cease-fire. And according to the group’s most recent reports, the daily tally of violations is increasing. An unexploded mortar at a battlefield in eastern Ukraine.

In a March 30 interview with Radio Free Europe, Alexander Hug, the OSCE’s deputy chief of the Special Monitoring Mission to Ukraine, said: “We have seen in the past days and weeks a high number of cease-fire violations, namely in the Donetsk region.”

Russia’s involvement in the Ukraine war has Eastern Europe and the U.S. taking the threat seriously.

For the past several years, Russia also has shown a pattern of testing NATO’s defenses in Eastern Europe while building up its military presence in the region in places like the Kaliningrad enclave and the recently annexed Crimean peninsula.

NATO declared last year that any hybrid warfare provocation on a NATO state would prompt the invocation of Article V,  the alliance’s collective defense protocol, underscoring a pathway to a major war in Europe should Russia overreach militarily.

“If NATO sees foreign forces infiltrating its sovereign territory, and if we can prove it comes from an aggressor nation—then that’s Article V,” U.S. Air Force Gen. Philip Breedlove, NATO’s supreme allied commander, said in an interview with the German newspaper Die Welt in August 2014. The White House’s 2017 defense budget suggests a partial military pivot back to Europe, which would reverse the post-Cold War U.S. drawdown on the Continent and highlight how seriously the Russian threat is perceived to be.

The White House’s budget also quadruples funding for the European Reassurance Initiative from $789 million to more than $3.4 billion.

Totaling $1 billion in 2014, the initiative was meant to be a one-year emergency reinforcement of U.S. military forces in Europe.

An April 5 report by the Center for Strategic and International Studies, a U.S. think tank, said the White House’s 2017 budget increase for the European Reassurance Initiative “indicates the administration’s acknowledgement of the growing threat Russia poses to long-term U.S. national security interests in Europe and beyond.” Fighting in the Ukraine war has demolished villages along the 200-mile-long front line.

According to the Defense Department, the money will be used to pre-position U.S. military forces and military hardware across Europe, increase the number of U.S. troops stationed in Europe, and increase training and joint military exercises with European allies.

Describing the Pentagon’s budget at a Feb. 2 event in Washington, Defense Secretary Ash Carter said: “We’re taking a strong and balanced approach to deter Russian aggression, and we haven’t had to worry about this for 25 years. While I wish it were otherwise, now we do.”

Despite the pledged increase in U.S. military spending to defend Europe, Obama’s remarks in the April issue of The Atlantic spurred doubts among some in Ukraine about U.S. resolve to deter Russian aggression.

The article quoted Obama as saying: “The fact is that Ukraine, which is a non-NATO country, is going to be vulnerable to military domination by Russia no matter what we do.” Ukrainian soldiers relax in Pisky, a village outside the embattled Donetsk airport.

“Putin is trying to destroy Ukraine internally in this last year before the new American president comes to power,” Samus said, reflecting a common opinion among Ukrainian military and political analysts. He continued:

Putin understands that this might be the last year of maneuver in the post-Soviet area before the next American administration. Everyone assumes the U.S. will be more active in the region after Obama leaves.