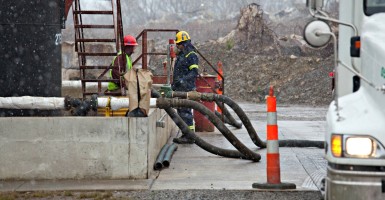 Workers unload fracking fluids from a tank truck in 2011 at an injection well in Youngstown, Ohio, where the fluids will be pumped deep underground. (Photo: Jim West/Newscom)

The lead researcher in a study that concluded that fracking in Ohio didn’t contaminate groundwater told The Daily Signal that, contrary to her previous remarks, donors to the study did not pull funding because of “specific disappointment” with those results.

Amy Townsend-Small, an assistant professor of geology at the University of Cincinnati who conducted the three-year study, did acknowledge that some financial backers “have declined to continue funding past the initial study period.”

However, Townsend-Small said in an email Monday to The Daily Signal, those decisions not to donate more might be because the study didn’t establish a relationship between hydraulic fracturing, or fracking, and water contamination in Carroll County and other areas that include the Utica Shale deposit.

Townsend-Small also said the results “show that fracking does not always lead to groundwater contamination, but that continuous monitoring is needed to ensure contamination has not occurred.”

“The left likes to continually talk about settled science, but often it’s settled on a predetermined outcome,” Nick Loris, a research fellow at The Heritage Foundation who studies energy issues, told The Daily Signal. “Politicians use that predetermined outcome to justify policies that drive up the costs of affordable, reliable energy—even though those policies have little to no environmental benefit.”

The Daily Signal sought comment from the Deer Creek Foundation on why it decided to stop funding the fracking study in Ohio, but its executive director did not respond.

The major goal of the study by the University of Cincinnati’s geology department was to measure the presence of methane (CH4) in groundwater prior to the onset of fracking, and to compare the results to methane measured during and after the process.

In fracking, engineers inject water mixed with sand and chemicals into a well at high pressure, producing a fluid that fractures the rock and releases previously trapped oil and natural gas.

The energy industry has used the fracking technique for several decades. What’s new is the use of hydraulic fracturing together with precision directional drilling, enabling wells to be drilled horizontally right through the oil or natural gas rock itself.

The initial results of the university’s study were released Feb. 4 on the Carroll Concerned Citizens website during a regular meeting of the group, which seeks to inform residents about the long-term health and economic effects of mineral extraction.

Townsend-Small, the lead researcher, discussed key findings during this meeting. Her presentation may be seen on YouTube.

“I am really sad to say this, but some of our funders, the groups that had given us funding in the past, were a little disappointed in our results,” Townsend-Small was quoted as saying. “They feel that fracking is scary, and so they were hoping this data could be a reason to ban it.”

‘We Did Not Find Any Changes’

The geologic research team concentrated its groundwater measurements in a rural farming area of Carroll County because that county has the largest number of hydraulic fracturing permits in Ohio.

The team also measured groundwater in  the state’s Belmont, Columbiana, Harrison, and Stark Counties, but less frequently than in Carroll. The study occurred in tandem with a sharp increase in the number of active gas wells in Carroll, from three in late 2011 to 354 in 2015.

“We measured dissolved salt, pH, methane concentration, and methane isotopic composition in groundwater over several years in the Utica Shale fracking region of Ohio,” Townsend-Small said in the email to The Daily Signal, adding:

These measurements can indicate whether fracking fluid or natural gas was introduced into groundwater over the study period.  We did not find any changes in any of these measured constituents over the study period, in which the number of fracking sites in the region increased dramatically.  This does not mean that contamination did not happen in other parts of the region or has occurred after our study ended, but it does indicate that fracking can take place without contaminating water resources, as has happened in other regions.

We measured about 25 groundwater wells[.] … We found no relationship between CH4 [methane] concentration in groundwater and proximity to active gas well sites, and no significant change in CH4 concentration or isotopic composition, pH, or conductivity in water wells during the study period.  We also did not find evidence for natural gas in water wells, although we did have several study sites with CH4 concentrations in the dangerous range, but the CH4 in these wells was from coal beds, not natural gas.

Private donors to the three-year study included the Deer Creek Foundation and the David and Sara Weston Fund.

But taxpayers also covered some costs in the form of a $85,714 grant from the Ohio Board of Regents and federal funding from the National Science Foundation, which news reports said went toward an isotope ratio mass spectrometer.

State Rep. Andy Thompson, a Republican who represents a district that includes Carroll County, has called for the university’s study to be more widely circulated because it received taxpayer support.

‘They Declined to Renew Funding’

On the question of continued funding, Townsend-Small sought to modify her reported remarks that some donors were “disappointed” in the results because they hoped the findings would support a ban of fracking, which they consider “scary.”

She told The Daily Signal in her email:

Just to clarify, none of our funders have expressed specific disappointment in our work, but some have declined to continue our funding past the initial study period. The study is not being suppressed, as has been published elsewhere.  A preliminary version of our report is available through my website at UC and the website of our community partner, Carroll Concerned Citizens.

Our study was funded by the Deer Creek Foundation and the David and Sara Weston Fund. The Weston group is continuing to fund our project at a small level. The Deer Creek Foundation never expressed specific disappointment about our findings.  They just declined to renew our funding and I assumed it was due to a lack of excitement about our results.

While the University of Cincinnati study did not find a connection between fracking and groundwater quality, Townsend-Small told The Daily Signal, this was not necessarily a hard and fast rule: