Speaker Ryan’s Trip to Israel Sends All the Right Signs 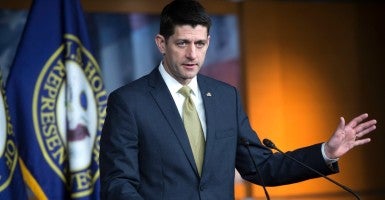 As much as security and geopolitical relations will be at the forefront of the visit, the economic bonds between the two free-market democracies need attention too. (Photo: Shawn Thew/EPA/Newscom)

Rep. Paul Ryan, R-Wisc., is in Israel on his first foreign trip as Speaker of the House.

As much as security and geopolitical relations will be at the forefront of the visit, the economic bonds between the two free-market democracies need attention, too. Vibrant economic growth is vital to Israel’s resilience and an important element in its overall security.

In fact, Israel is partner to the oldest U.S. free trade pact. Since the implementation of the U.S.-Israel Free Trade Agreement three decades ago by President Ronald Reagan and Prime Minister Shimon Peres, two-way trade between the countries has multiplied tenfold to over $40 billion per year. The trade pact between the two nations is a symbol of shared opportunity, innovation, and prosperity.

Over the past decades, Israel has become a high-tech superpower. According to a recent book titled “Start-Up Nation: The Story of Israel’s Economic Miracle,” Israel produces more start-up companies on a per capita basis than Japan, China, India, Korea, Canada, and all of Europe.

The latest edition of the Heritage Foundation’s “Index of Economic Freedom,” a cross-country policy guidebook, puts it this way:

Israel’s openness to global commerce is an important factor in promoting innovation and productivity growth. Benefitting from an increasingly diversified productive base and ongoing structural reforms, the economy has grown almost 4 percent annually over the past five years. The relatively sound judicial framework that sustains the rule of law and provides consistent protection for property rights has contributed to economic stability and long-term competitiveness.

It is notable that the small, open economy has charted an upward trajectory of economic freedom since 2013, reaching its highest level ever in the 2016 index. The country is now striving to be a scale-up nation, and surely, more market-based reforms will facilitate the country’s progress toward greater economic freedom and entrepreneurial dynamism.

By contrast, over the last 10 years, America’s economic freedom has dwindled precipitously to its lowest level ever.

Surely that must be a vital part of his message in Israel.