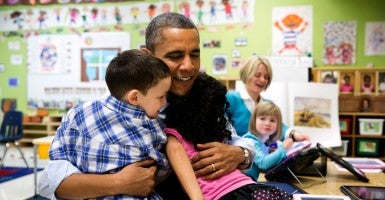 By the time most of this generation can vote, their portion of the federal debt will already be $68,000 per person. (Photo: Pete Souza/ZUMA Press/Newscom)

Out of control spending drives national debt to unsustainable levels and the government knows it. The recently published 2017 fiscal year House Congressional Budget Resolution even features a chart titled “Spending is the Problem.”

But Congress needs to practice what it preaches. The very same document proposes spending $57 billion more on discretionary programs than what Congress proposed to spend on this budget category last year.

By the end of the decade, our national debt held by the public is expected to reach $23.6 trillion, or 85.6 percentage of GDP

Time and again legislators fail to take their own advice to reduce spending. Instead they put off serious budget solutions while the national debt balloons. By the end of the decade, our national debt held by the public is expected to reach $23.6 trillion, or 85.6 percentage of GDP (gross domestic product). This is expensive for Americans today, but crippling for the next generation.

When new parents worry for the future they rarely consider how the national debt will impact their families. Unfortunately, if left unchecked, our growing debt will pose a serious threat to American families’ financial well-being. The national debt per person is the nation’s publicly held debt divided by the U.S. population. While this is not to suggest that every American is responsible for paying this much of the national debt, it puts a real burden on individuals. Federal debt, so large that it approaches the size of a nation’s economy, slows growth and reduces personal incomes.

A child born this year bears a $42,000 share of the publicly held federal debt. Before these children even take their first steps, Washington has made decisions that reduce their future economic opportunity.

By the time most of this generation can vote, their portion of the federal debt will already be $68,000 per person. By the time this next generation of Americans is able to have a say in federal spending, the decision to reduce their standard of living was made without their input and the damage done.

But there is hope. Congress can reduce debt with long overdue budget reforms that tackle spending. The largest portion of the federal budget goes to outdated entitlement programs, which grow year after year with little input from Congress or the American people.

The 2015 “Wastebook,” put together by Sen. Jeff Flake, R-Ariz., found 100 examples of government waste that cost taxpayers $100 billion. On top of that, the government spent a staggering $125 billion on improper payments in 2015. That means that the government paid $125 billion dollars to people who were not supposed to get paid, or for goods and services the government did not receive. With spending habits like these, it is clear why our national debt is out of control.

Congress must begin to reduce spending this year, and adopt a firm plan now to improve America’s fiscal and economic future over the long run.

The Heritage Foundation’s “Blueprint for Balance” is just such a plan. Heritage’s blueprint recommends entitlement reforms and reductions in spending that reduce debt and balance the primary budget (without interest on the debt) within the first year. A balanced, responsible, and conservative budget will give American children the kind of economic opportunity that parents hope for.