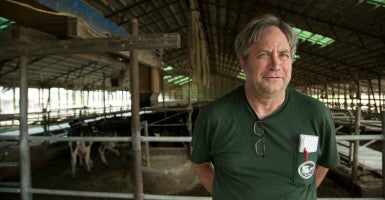 Randy Sowers owns a dairy farm in Frederick, Md. In 2012, the IRS seized $63,000 from his bank account and alleged he made structuring violations. Sowers eventually settled with the government, forfeiting $29,500. A bipartisan group of lawmakers is now urging the IRS and Justice Department to return their money. (Photo: Institute for Justice)

A bipartisan group of lawmakers on the House Ways and Means Committee is urging the Justice Department, Treasury Department, and Internal Revenue Service to return money “inappropriately” seized by the IRS under civil asset forfeiture.

Led by Oversight Subcommittee Chairman Peter Roskam, R-Ill., and Ranking Member John Lewis, D-Ga., the group of 14 lawmakers also called on the agencies to give property owners the opportunity to petition the government for funds seized for structuring violations, which involve making consistent cash transactions of just under $10,000 to avoid bank reporting requirements.

In their letters, the lawmakers criticized the IRS and Justice Department for appearing “unconcerned that the IRS and DOJ’s actions in these cases unfairly harmed American citizens and have undermined Americans’ trust in their government,” and dragging their feet in returning the money.

Roskam, Lewis and their colleagues specifically referenced the case of Randy and Karen Sowers, owners of a dairy farm in Frederick, Md., who had $63,000 seized by the IRS for alleged structuring violations in 2012.

The tax agency claimed the couple deliberately made consistent cash withdrawals or deposits of just under $10,000 to avoid reporting requirements.

Though the Sowers said the money deposited into the dairy farm’s account came from customers who paid with cash at their local farmer’s market, they ended up settling with the federal government and forfeiting $29,500 to the IRS.

Roskam and Lewis first sent a letter to the Justice Department, Treasury Department and IRS urging them to return the $29,500 to the Sowers in August.

Six months after the letter was sent, Roskam met with officials from the IRS and Justice Department to discuss the case, and was told the agencies hadn’t made progress in returning money the IRS had inappropriately seized under civil asset forfeiture.

At an event at the National Press Club on Thursday, IRS Commissioner John Koskinen responded to the Oversight Subcommittee’s letters, telling reporters many of the cases involving money seized because of structuring violations were in the Justice Department’s domain.

“It overstates the case to say that we don’t understand or aren’t willing to respond,” Koskinen said, according to Politico. “If people ask for a review of it, we have a process to do that in the cases we control, and if they’re cases for Justice, we give Justice our recommendation.”

In their letters, Roskam, Lewis and their fellow lawmakers are calling on the agencies to give “all due consideration” to petitions filed by civil forfeiture victims asking for their money back. It’s unknown how many petitions have been filed.

Civil asset forfeiture is a tool that gives law enforcement the authority to seize cash, cars and property if they suspect it’s tied to criminal activity.

In some cases, property owners are never charged with a crime, and many, like the Sowers, have been accused of committing structuring violations because of their pattern of cash deposits.

In many of those instances, though, property owners are unaware they are violating the law and are never charged with a crime.

To address the number of people who had money seized for structuring violations but were never charged with a crime, the IRS changed its policy in October 2014 governing such seizures. Under the new policy, the tax agency could only pursue structuring cases in which the money stemmed from illegal activity.

The lawmakers on the Ways and Means Oversight Subcommittee are also calling on the IRS and Justice Department to give property owners who had money seized prior to October 2014 the opportunity to petition the government for remittance of funds.