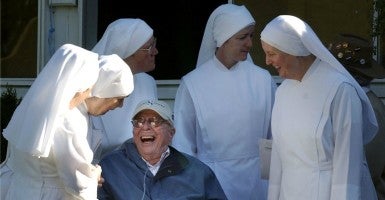 Grace Stark is a M.A. candidate in bioethics and health policy at Loyola University Chicago, and holds a B.S. in Health Care Management & Policy from Georgetown University. Her writing has been featured at the Public Discourse, The Federalist, RedState, and the Daily Signal. You can follow her online at alldoneinlove.com. She currently lives in Guam with her husband.

The Little Sisters of the Poor is a group of Catholic nuns who typically lead a quiet, dignified existence caring for the elderly poor. In the last few years, that quiet existence has been troubled by the constant court battles the group has been fighting over the Affordable Care Act’s so-called “contraceptive mandate,” which requires employers to offer employee health plans that include coverage for contraceptive services, including sterilization and abortifacient contraceptives.

As a Catholic group, the Little Sisters oppose all forms of artificial contraception and argue that the ACA’s mandate to provide contraceptive services in their employee health care plans violates their conscience as a Catholic religious organization. The issue at stake in the Little Sisters’ case is chiefly one of religious liberty, but it ultimately springs from a sincerely held and authentically Catholic conception of bioethics. The Little Sister’s long legal battle began four years ago in March 2012, when they first began publicly opposing the ACA contraception mandate. Throughout their legal journey, the Little Sisters have traveled from the District Court of Colorado, to the Tenth Circuit Court, and finally, to the highest court in the land. The Supreme Court will begin hearing oral arguments for the case Wednesday and the recent death of the devoutly Catholic, strongly conservative justice Antonin Scalia has many interested parties concerned about the potential outcome for the Little Sisters, and the precedent their case will set.

The Problem With the Government’s ‘Compromise’

What the Little Sisters Believe

Here, it is important to understand that while the Little Sisters’ Supreme Court case hinges on religious liberty, the core issue is the Catholic belief that the use of any form of contraception in the avoidance of pregnancy constitutes a moral evil. This is a belief long held by the Catholic Church, with origins in Scripture, and continuously defended in official Church doctrine—most notably in Pope Paul VI’s landmark 1968 encyclical “Humanae Vitae.” Church teachings on contraception are firmly rooted in the Church’s conception of natural law, human sexuality, the dignity of the human person, and the sacrament of marriage.

While spouses need not intend pregnancy with each sexual act, there must be an openness to the creation of new life. Therefore, the Church strictly prohibits the use of all forms of contraception, and instead encourages couples to responsibly and faithfully plan their families using one of the several highly effective methods of Natural Family Planning.

Furthermore, through various functions, some contraceptive agents may function as abortifacients. Because breakthrough ovulation happens to a varying degree across different contraceptive options, conception may occur despite the couple’s use of contraception. The newly formed life may then be prevented from implanting in the uterus due to the contraceptive, which results in the death of the new life—thus, the contraceptive functions as an abortifacient. The Catholic Church’s longstanding injunction against abortion, which it views as a grave moral evil, makes abortifacient contraceptives all the more morally reprehensible. There’s also the serious – though conveniently overlooked – issue that greater access to contraception does not actually reduce the frequency of unintended pregnancies or abortions, but may actually increase both.

As a fundamentally Catholic group, there can be no doubt that the Little Sisters’ adherence to the Church’s teachings on contraception are “sincerely held.” The sincerity claim is an important one, in light of last year’s Supreme Court ruling in Burwell v. Hobby Lobby Stores, Inc.

And while the sincerity of Hobby Lobby’s Christian conviction was uncontested in their own successful RFRA-based challenge to the ACA’s contraception mandate, calls have been made that in moving forward, the Court should place more scrutiny on the sincerity of religious objections.

No one with an understanding of Catholic teaching, as simply and clearly laid out in this piece, should doubt that the Little Sisters’ religious objections are authentic and sincere.

It now remains for the Court to decide whether the Little Sisters’ claims of forced compliance in providing contraceptives to their female employees passes the litmus test of being an “undue burden” on their religious conscience. Personally, I am of the belief that the Little Sisters are a much better judge of what actions will burden their conscience than anyone else could ever hope to be.