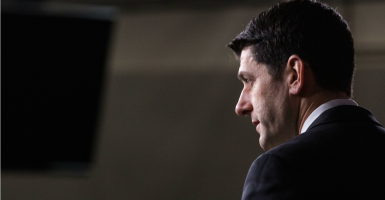 Conservatives in the House of Representatives remain unsatisfied with the budget blueprint produced by Republican leadership. Now their vocal dissatisfaction places both the future of that document and the entire budget process in question for 2016.

Monday night, the House Freedom Caucus, a group of conservative lawmakers, announced its official opposition to any proposal that sets discretionary spending at the $1.07 trillion level. They want to reduce spending by $30 billion to return to $1.04 trillion.

“House leadership has continually asked the Republican conference to support President Obama’s budget levels,” the caucus wrote in a statement. “As a group, we have decided that we cannot support the current budget.”

The announcement ends weeks of negotiation between House Speaker Paul Ryan, R-Wis., and the conservative group. GOP leadership has struggled to get the entire conference on board with a budget so that the House can begin allocating government funding through the appropriations process.

Rep. Raúl Labrador, R-Idaho, said the Freedom Caucus also wants to begin that process. But he and fellow conservatives in the caucus need a budget that lowers spending levels and reflects their priorities.

‘A Vision and Solutions’

An anathema to conservatives, the Boehner-Obama deal increased spending by $30 billion above limits established in the 2011 Budget Control Act. Unpopular among the GOP conference, only 79 Republicans voted for the measure while another 167 opposed it.

So far, Budget Chairman Tom Price, R-Ga., hasn’t persuaded conservatives with his new budget blueprint that uses the old $1.07 trillion spending level. Introduced Tuesday and dubbed the “Balanced Budget for a Stronger  America,” the document aims at balancing the budget and reducing the deficit by $7 trillion in a decade.

His plan “provides a vision and specific solutions for how we can, as a nation, get our fiscal house in order, strengthen our national security, provide support for those who need assistance, and empower our citizens and our communities,” Price said.

The budget proposal also includes Republican sweeteners, such as halting the closure of  the military prison at Guantanamo Bay, and calls for a vote on a balanced budget amendment to the Constitution.

But some conservative members who sit on the Budget Committee say they won’t bite.

How to Get to Yes

Rep. Dave Brat, R-Va., told The Daily Signal he was open to compromise, but after reviewing the details Tuesday, he will not support the Price budget.

Brat said he could have stomached the higher spending level, which conservatives find unappetizing, in exchange for $30 billion in cuts to discretionary spending over two years and $100 billion’s worth of savings in entitlement reform in 10 years.

“To get to yes,” Brat said, those cuts couldn’t be “aspirational,” but “must be in law.” In Brat’s estimation, the Price budget doesn’t deliver.

For Rep. Marlin Stutzman, R-Ind., any spending above sequestration levels is a nonstarter.

“It’s not even a tough choice, it’s just a commonsense choice,” Stutzman told CQ Monday. With “less money coming in, we can only spend less money and go back to the $1.04 trillion number.”

That opposition could make it difficult for Price to get his budget out of a committee split among 22 Republicans and 18 Democrats. The vote margin is already narrow: If just four Republicans oppose the measure, the package will fail.

But if the Price measure does advance to the House floor, it’s also unclear if it can win the 218 votes needed to pass. The Republican conference remains scattered and unsupportive.

In addition to the roughly 40 members of the Freedom Caucus, the larger Republican Study Committee already registered its opposition to increased spending. Though there’s some overlap in the membership of the groups, the ranks of the RSC swell past 170 members.

Since picking up the gavel, Ryan has made a top priority of changing the way the House does business.

Author of several previous budgets, the Wisconsin Republican wants Congress to fund the government through what is called regular order. That is, Ryan wants lawmakers to allocate funding to individual agencies and programs through 12 separate appropriations bills rather than one catchall omnibus spending bill.

“We want to work together and get this done, but it’s going to be a decision ultimately left up to our members,” he said.

Without a budget, Congress could fund the government either through an omnibus spending bill or a stopgap spending bill, known inside the D.C. Beltway as a continuing resolution.

Ryan and Senate Majority Leader Mitch McConnell, R-Ky., both have indicated that the Senate will not consider any budget resolution with a number lower than $1.07 trillion.

Skepticism over the Senate’s ability to follow through on a budget resolution continues to fuel fears in the House.

Monday, Brat told The Daily Signal that it’s harder to pass a budget when “the Senate seems to be upside down.”

While the Senate is “signaling they’re not even going to do a budget,” Brat said, he won’t support “just [doing] a show vote that we pass in the House.”

Some conservative groups have lined up in opposition to a budget at the higher $1.07 trillion spending levels.

Tuesday, Heritage Action for America urged lawmakers “to vote no on [the] Bipartisan Budget Act” and announced it would key-vote the bill on its legislative scorecard.