This Governor Ordered a Raise for Some State Workers. Here’s Why Business Groups Are Against It. 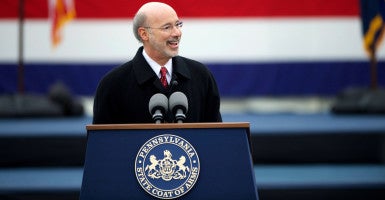 Business groups Tuesday criticized Pennsylvania Gov. Tom Wolf, a Democrat, for his decision to raise the minimum wage for state employees and contractors from $7.25 to $10.15 an hour.

The increase, authorized by Wolf through an executive order Monday, would elevate the wages of workers in Pennsylvania state government and certain businesses that contract with the state by nearly $3 per hour.

The order applied immediately to roughly 450 of the state’s 79,000 employees.

Suzanne Stoltenberg, Pennsylvania state communications director at the National Federation of Independent Business, said the state’s contracting procedure is already arduous and time-consuming. She contends that the governor’s mandate will further discourage small businesses from participating in the process.

“For a lot of the smaller businesses—some of them who hire entry-level people that have no training—they literally cannot afford to up their [pay] by $3 per hour when employees may be part-time, brand new, or have no skills,” Stoltenberg told The Daily Signal.

She said Wolf’s order also would hit taxpayers in the form of higher costs.

“It’s an irony of sorts—you want to get value for your state tax dollar when you’re contracting, but then you’re telling the people who are contracting that their labor costs are going to be higher.”

Democratic state legislators have tried passing bills to raise Pennsylvania’s minimum wage across the board, but Republican lawmakers successfully stalled those efforts.

The state’s Independent Fiscal Office released a report in November 2015 that analyzes one of the legislature’s proposed wage increases. The study projected that increasing the minimum wage from $7.25 to $10.10 would result in the loss of 31,000 jobs in Pennsylvania.

“We have to take into consideration when we do these things that it has an economic impact,” state Sen. Stewart Greenleaf, R-Montgomery County, told The Daily Signal. “The higher the minimum wage is, the more people who lose their jobs.”

Greenleaf, who voted in 2006 to raise the state’s minimum wage to the current $7.25 an hour, said if Pennsylvania moves to increase wages again, it should do so incrementally so that negative effects are minimized.

Alex Halper, director of government affairs at the Pennsylvania Chamber of Business and Industry, said the governor used his executive power as a “springboard” to push for a statewide minimum wage increase.

“I’m sure a lot of employers would love to have the ability to, with a magic wand, increase their employees wages, but obviously in the real economy that’s not the way it works,” Halper told The Daily Signal.

It’s not clear, he said, how Wolf intends to pay for raises for state employers. He predicted that the issue would make its way into this year’s budget negotiations.

John Dodds, director of the Philadelphia Unemployment Project, meanwhile, said benefits of raising the minimum wage statewide far outweigh the cost. While he conceded that an increase could result in job losses, he noted that 1.4 million individuals would see their wages increase 40 percent.

“You have to look at the trade-off here,” Dodds told The Daily Signal. “Money is good for the economy, it will have a stimulant effect, and it will very quickly get circulated back through the local small businesses and the local economies. In that regard, it’s probably a positive for unemployment.”