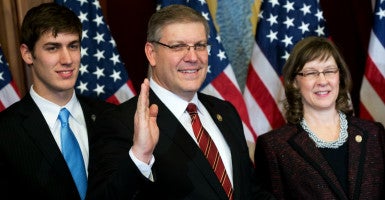 Rep. Barry Loudermilk (center) is proposing an amendment to the U.S. Constitution that would require the federal government to balance its budget in 10 years. (Photo: Tom Williams/CQ Roll Call/Newscom)

As a method to control spending, conservative lawmakers often propose imposing a balanced budget amendment to the United States Constitution that would require the federal government not to spend more than it earns.

This effort has always failed. Such an amendment has never been enacted at the federal level.

But that isn’t stopping one freshman lawmaker from trying yet again.

“The only way we can control spending in Congress in today’s free-spending era is with a balanced budget constitutional amendment,” said Rep. Barry Loudermilk, R-Ga., in an interview with The Daily Signal. “This could be the bill of the century.”

Although there is little reason to expect this effort to end differently due to the high bar required to pass a constitutional amendment, Loudermilk claims that his plan contains an elixir that others haven’t.

Under Loudermilk’s legislation, which he introduced March 3, Congress would not have to actually balance the budget until 10 years after the amendment is ratified.

As a comparison, a previous balanced budget amendment introduced by Sen. Mike Lee, R-Utah, last year would have given Congress two years from ratification to achieve balance (a spokesperson for Lee told The Daily Signal that Lee “isn’t opposed” to Loudermilk’s version).

Loudermilk, who belongs to the conservative House Freedom Caucus, believes that the longer window prescribed by his bill could convince some Democrats to get on board.

“If we straight up pass a balanced budget amendment, it wouldn’t get the numbers, because too many people are addicted to spending money in Washington, D.C.,” Loudermilk said. “So this version has a better chance than others because of the 10-year window. Let’s see if enough Democrats care enough about this country to get our house in order. Most of us won’t be here in 10 years, so this isn’t about us. For the sake of our children and grandchildren, we have got to do this.”

In January, the nonpartisan Congressional Budget Office estimated that the federal budget deficit will be $544 billion in 2016, representing the first increase to the deficit since 2009.

The CBO blamed that increase on a $900 billion tax deal passed by Congress in December, which made permanent many temporary tax breaks for businesses and individuals.

Indeed, the CBO expects the tax deal to primarily account for nearly half of the $1.5 trillion increase in deficits anticipated over the next decade.

Loudermilk’s amendment would also require a two-thirds vote in each chamber of Congress to increase the deficit or raise federal spending levels beyond 18 percent of the U.S. gross domestic product for the previous year.

In addition, Loudermilk’s amendment, like many proposals before it, would require a two-thirds vote (a supermajority) for any tax increases.

Unlike most federal legislation, a constitutional amendment doesn’t go to the president for his approval.

But a constitutional amendment needs a two-thirds majority vote in both bodies for passage, and it would then need to be ratified by three-fourths of the states—38 of them—to take effect.

The states can also pursue a constitutional amendment on its own, through a convention, if two-thirds of state legislatures, or 34 states, propose to do so.

Critics of a balanced budget amendment argue that it would constrain economic growth and effectively make it impossible to pass a tax hike.

In addition, opponents have noted that the federal government achieved a budget surplus under President Bill Clinton in the late 1990s without the aid of a balanced budget amendment.

“Balancing the budget over the next 10 years would be difficult, to say the least,” said David Wessel, the director of the Hutchins Center on Fiscal and Monetary Policy at the Brookings Institution.

In an email to The Daily Signal, Wessel added:

That’s one reason it’s proving so hard to fashion a budget resolution with that goal that Congress can actually implement with spending cuts and tax increases. Balancing the budget over the next decade, along with the tax cuts that Republican presidential candidates are proposing, is impossible.

House and Senate leaders are pushing their members to write spending bills this year that follow the spending levels set by a bipartisan budget agreement reached in December.

That budget agreement boosts spending this year by $30 billion.

Conservatives in the House want their leaders to ignore that deal and reduce spending. If that were to happen, Republican leaders in both chambers believe that it would complicate Congress’ goal of individually passing 12 annual spending bills this year rather than combining them into a last-ditch, all-in-one omnibus measure.

To appease conservatives, House leaders proposed that members vote on a standalone bill to cut mandatory spending on programs like Medicare, Medicaid and Social Security in exchange for their support on the budget blueprint with $30 billion in additional spending.

Conservatives have rejected that proposal, largely because they doubt that the mandatory spending savings will ever come to fruition. But Loudermilk suggests that his balanced budget amendment would pressure Congress to fulfill the entitlement reforms it has been pledging for years.

“If we pass this, and it gets enacted, it becomes the catalyst for tax reform, and entitlement reform, and all the other things we talk about but never get done,” Loudermilk said.

While crediting Loudermilk’s push for a balanced budget amendment as a way of being “transparent” with the American people about its goals, Paul Winfree, the director of the Thomas A. Roe Institute for Economic Studies at The Heritage Foundation, says Congress would be better off first achieving spending reforms.

Loudermilk, however, believes it’s easier for the notoriously slow-moving Congress to act when it has a carrot to chase.

“This [a balanced-budget amendment] becomes the catalyst for spending reform because now we have to do it,” Loudermilk said. “It is not a choice. This is something you do, or you are in violation of the constitution.”