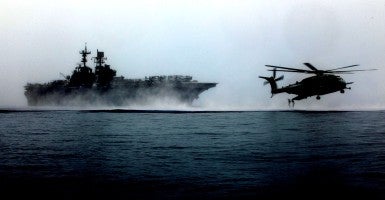 The total defense budget was cut by 25 percent in real terms between 2011 and 2015. (Photo: U.S. Marine Corps photo by Cpl. Joey Mendez/Released)

House Republicans are trying to develop a budget that both is fiscally responsible and increases defense spending. Unfortunately, the latest proposal underfunds defense and overfunds wasteful domestic programs, and House Republicans are headed for a political buzz saw if they shortchange current military operations to pay for defense increases elsewhere.

This gimmick will distract from vital policy debates about those same operations and is unlikely to succeed in actually increasing the defense budget.

Before discussing the House proposal, we must remember where things stand today. The total defense budget was cut by 25 percent in real terms between 2011 and 2015. As discussed in the 2016 Index of Military Strength, these cuts resulted in a smaller, less prepared military even as threats around the globe continue to grow. An increased defense budget is needed to begin rebuilding the U.S. military.

President Barack Obama’s 2017 proposal for the defense budget is too low. For fiscal year 2017, Obama has requested $551 billion for the base defense budget plus funding for ongoing operations. Last year, both Congress and Obama proposed higher defense levels for this year at $574 billion and $573 billion, respectively. The Heritage Foundation’s Blueprint for Balance proposes $600 billion for the base defense budget. Even at $600 billion, defense spending would still be well below historical benchmarks.

Congress faces the challenge of increasing defense spending while bringing the federal budget back under control.

House Republicans should pass a budget along the lines of the Blueprint for Balance: Increase defense spending to $600 billion for the base defense budget and fully fund ongoing operations. But to keep total federal spending in check, it should simultaneously cut non-defense discretionary spending (cuts outlined in the Blueprint range from $14 million for a Department of Agriculture catfish inspection program to $3.7 billion for climate programs) and reform major entitlement programs like Medicare and Social Security to ensure they are financially stable for future generations.

The latest House Republican proposal gets one part right: It increases the base defense budget to $574 billion for 2017. More should be done to increase the defense budget, but this is a step in the right direction.

Unfortunately, what the proposal gets wrong outweighs what it gets right. Instead of decreasing domestic spending to offset increasing the defense budget, the proposal would cut funding for current military operations (in what is called the Overseas Contingency Operations [OCO] account). The theory is that a new president will enter office partway through the fiscal year and would be forced to request an emergency supplemental funding bill to pay for the rest of the year’s military operations.

This is a bad idea for a few reasons.

First, Obama and his allies in Congress are likely to oppose this maneuver and condemn Republicans for not providing sufficient funding for troops in combat. While Republicans will try to argue that more funding is coming, the truth is that the Republican proposal will not fully fund ongoing operations in Afghanistan, the Middle East, and Europe. In short, House Republicans are proposing to underfund troops in combat in an election year, and Democrats will likely make full use of that political attack.

Second, because this budget proposal will likely degenerate into a political food fight, important policy discussions will get lost. Congress should be asking the administration tough questions about troop levels in Afghanistan, the fight against ISIS, and efforts to reassure our European allies. However, if it deliberately underfunds these missions, Congress will appear disingenuous in any attempts to correct Obama’s policies. For example, how can Congress urge higher troop levels in Afghanistan if Congress won’t provide the full funding for that mission?

Lastly, this proposal is unlikely to succeed in the end. Whether in the Senate or the White House, Democrats are likely to block any bills that don’t fully fund ongoing operations. If Congress is going to fully fund these operations eventually, it is better to fund them now so that debates about increasing defense spending and various policy issues are not subsumed into a political brouhaha.

The better path is to cut non-defense so that defense spending and ongoing operations can be funded. This path, as outlined in the Blueprint for Balance, would also face political challenges, but instead of pitting military operations against military investment, the choice would be between a strong military budget and non-defense agencies like the Environmental Protection Agency.