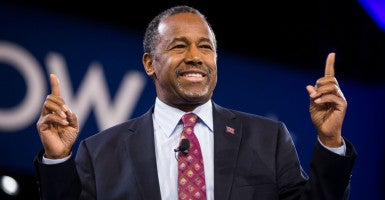 “The more people who become part of the productive side of America, the better off it will be for everybody,” retired neurosurgeon Ben Carson said. (Photo: Jim Lo Scalzo/EPA /Newscom)

“Conservatives should not be ashamed of capitalism,” Carson said Friday before a full house during the annual Conservative Political Action Conference, or CPAC, held right outside Washington, D.C. He added:

We have those who have tried to make [capitalism] sound like a bad word. It’s not a bad word—it is the highest standard of liberty that anybody has ever accomplished.

Alluding to socialism, Carson said policies that force individuals into government dependency are the opposite of compassion.

“The government doesn’t understand what compassion means,” he said. “They think [it means] patting somebody on the head and saying, ‘There, there you poor little thing, I’m going to take care of all of your needs.’”

Americans have to focus on creating a path for individuals who are dependent on government programs to have the opportunity to join the “strength and fabric” of the nation, Carson said:

That’s how we become strong as a nation. The fewer people we have to pull along and the more people who become part of the productive side of America, the better off it will be for everybody.

The acclaimed neurosurgeon encouraged individuals from all along the political spectrum to set aside anger and concentrate on having conversations to discuss differences and find solutions.

Some Americans are angry, he said, but they need to “calm down and use the amazing intellect that God has given us,” so that fear doesn’t affect judgment. Carson said:

We the American people are not each other’s enemies. If we’re fighting each other all the time, then it makes it accessibly easy for those who really are our enemies—the radical Islamic terrorists—to destroy us. Why would we make their job easier for them by trying to destroy ourselves?