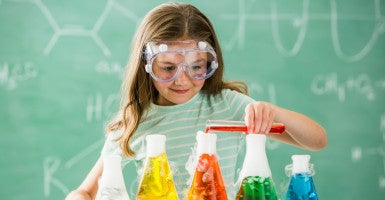 “We need to make sure our science standards are actually teaching science and not pushing a political agenda,” Del. Jim Butler, a Republican, said. (Photo: Mike Kemp Blend Images/Newscom)

West Virginia state lawmakers are digging in against new science education standards in public school curricula that reflect only one side of the climate change debate.

The West Virginia House of Delegates voted 73-20 on Friday to delay implementation of  the standards, based on Next Generation Science Standards and originally set to go into effect this July, the Charleston Gazette-Mail reported.

The new standards include teaching K-12 students in mandatory courses that global temperatures have risen and that human activities are the primary cause.

“This [bill] says let’s keep the standards we have in place now, and let’s take a more thorough look and make sure we’re getting the best standards available,” Del. Paul Espinosa, R-Jefferson, chairman of the House Education Committee, said.

The bill now moves to the state Senate. Republicans hold the majority in both chambers.

Members of the House of Delegates were not satisfied.

“We need to make sure our science standards are actually teaching science and not pushing a political agenda,” Del. Jim Butler, R-Mason, lead sponsor of the bill, said.

In an energy-producing state, it’s a concern to me that we are teaching our kids potentially that we are doing immoral things here in order to make a living in our state.

The legislation passed by the House, H.B. 4014, would keep current science education standards in place through June 2017.

“There’s nothing that upsets me more than the idea that it’s a proven fact that climate change is man-made,” Del. Frank Deem, R-Wood, said in the House last week, the Gazette-Mail reported.

“Starting in kindergarten, you’re talking about teaching the kids about how humans negatively affect the Earth,” Del. Michel Moffatt, R-Putnam, who introduced the science standard amendment in H.B. 4014, said in support of the legislation. “In an ideal world, you could interpret that as, sure, everyone has a footprint, but you could also twist that into all fossil fuels are bad.”

Advocates of the new standards disagree.

“West Virginia’s children, like children everywhere, need to learn about the science of climate change,” Ann Reid, executive director of the National Center for Science Education, an organization that defends teaching climate science in the classroom, said in a statement.

Last year, the West Virginia Board of Education repealed the Common Core education standards in the state. But some have criticized the new standards for being too much like Common Core.