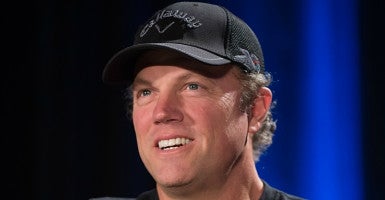 A popular television and movie actor has quit Twitter in protest of policies he says limit free speech.

“I’ve had enough. Twitter is dead to me,” Adam Baldwin told Independent Journal Review. “I’m going to find greener pastures elsewhere and I’m not coming back.”

Baldwin, whose big-screen credits include “The Patriot” and “Independence Day,” currently stars in the TNT series “The Last Ship.” He said Twitter’s suspension of conservative writer Robert Stacy McCain was a significant factor in his decision.

It’s really a shame that so-called ‘liberal thinkers’ and the so-called ‘tolerant crowd’ [are] intolerant of varying viewpoints. They’re so afraid to hear people disagree with them. Instead of ignoring it or providing their own arguments in return, they say ‘Shut up!’

Baldwin, who is not related to the acting Baldwin brothers, had 230,000 Twitter followers. He deleted his entire Twitter history Monday except for a tweet calling for the dismissal of Twitter CEO Jack Dorsey and a disbanding of the new Trust and Safety Council.

Twitter announced earlier this month it was forming a Trust and Safety Council to provide input on “tools and policies” that will help users “express themselves freely and safely.”

A statement on the Trust and Safety Council’s homepage says:

To help give your voice more power, Twitter does not tolerate behavior intended to harass, intimidate, or use fear to silence another user’s voice.

Working together, we will ensure Twitter is a platform where anyone, anywhere can express themselves safely and confidently.

Trust and Safety Council members include liberal groups such as the Dangerous Speech Project, the LGBT advocacy group GLAAD, and the Anti-Defamation League.

Feminist and activist Anita Sarkeesian, who sparked controversy with her critique of how women are portrayed  in video games, is also a member of the council through her charity Feminist Frequency.

“[Screenwriter-director] Joss Whedon got off Twitter and that really shocked me … Sarkeesian had a big hand in Joss leaving,” Baldwin, who starred in Whedon’s science fiction TV show “Firefly,” said.

In a 2015 Buzzfeed interview, Whedon denied claims he left Twitter because of  “militant feminists” and lauded Sarkeesian for her effort to “stay on Twitter and fight back the trolls.”

Mike Gonzalez, a senior fellow at The Heritage Foundation and frequent Twitter user, told The Daily Signal he has “reservations about this, especially because there are liberal groups on it but no conservatives.”

Gonzalez wrote about the council for The Daily Signal in a piece headlined “Is Twitter Censoring Non-Politically Correct Viewpoints?”

“As a private company, Twitter can do what it wants, but in a country fairly split down the middle, it doesn’t make good business sense to alienate one half,” Gonzalez said.