Almost Half of US Residents Still Pay No Federal Income Tax 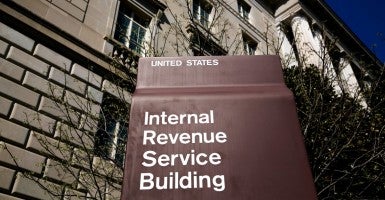 As President Reagan said, "Government is not the solution to our problem. Government is the problem.” (Photo: Kris Tripplaar/Sipa USA/Newscom)

According to data published by the IRS and the U.S. Census Bureau, 44.2 percent of U.S. residents paid no federal income tax in 2013 (the most recent year for which data is available).

No doubt many of the non-payers would willingly pay income tax in exchange for the chance to work in a more dynamic economy that generated more and better jobs. But our labor market has been hobbled by government regulations, cronyism, government power grabs, a tax code nobody understands, and federal waste. The chart tells the story.

In 1962, the percentage of people who did not pay federal income taxes themselves and who were not claimed as dependents by someone who paid federal income taxes stood at 24.0 percent; it fell to 12.6 percent by 1969 before beginning a ragged and ultimately steady increase.

An astounding 33.67 percent of tax returns are filed only to claim benefits while not paying any income tax. That is up from 18.64 percent in 1990.

An astounding 33.67 percent of tax returns are filed only to claim benefits while not paying any income tax.

As President Ronald Reagan said on Jan, 20, 1981, in his inaugural address, “Government is not the solution to our problem. Government is the problem.”