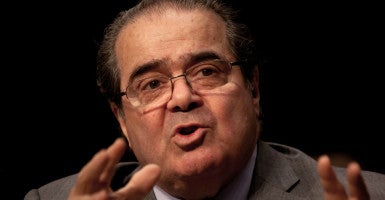 Antonin Scalia’s “net favorable” rating among Republicans was plus 6 last year, down from plus 36 in 2005, Gallup says. (Photo: Jeff Malet /Sipa/Newscom)

Americans were divided over Supreme Court Justice Antonin Scalia at the same time many didn’t know who he was, according to a historical review by the Gallup polling organization.

In a July 2015 poll, Gallup found that “popular perceptions of the conservative jurist were evenly divided, with 29 percent seeing him favorably and 27 percent unfavorably.”

Nearly a third of those surveyed said they were unfamiliar with Scalia, the long-serving and outspoken conservative justice who died in his sleep Saturday at age 79.

Another 12 percent reported not holding any opinion of Scalia. His favorability ratings mirrored those of Chief Justice John Roberts.

“Interestingly, the modest erosion of Scalia’s popularity over the past 15 years came primarily not from increased Democratic hostility to the Republican-appointed judge but rather because of souring Republican views,” Gallup analyst Andrew Dugan wrote.

President Ronald Reagan nominated Scalia to the Supreme Court in 1986.

Dugan said Scalia’s 2015 “net favorable” rating among Republicans, which he describes as “the difference between favorable and unfavorable ratings,” was plus 6, down from plus 36 in 2005.

“This drop—the largest among any of the three major political affiliations—may have been a bitter pill to swallow for one of the court’s most reliably conservative votes,” Dugan wrote, adding:

But as Gallup Poll Senior Editor Jeff Jones noted in his story about these data last year, Republicans’ growing ‘dissatisfaction with the high court more generally may be influencing how they feel’ about Scalia, rather than indicating a response to any of Scalia’s votes.

Gallup found that 54 percent of Americans held the Supreme Court in high confidence when Scalia first joined the court in 1986.

In September, Gallup “found the public’s approval of the Supreme Court at 45 percent, only three percentage points above its historical low observed in 15 years of tracking.”

“Partisan polarization over the Supreme Court’s job performance swelled in July 2015—just after the pair of rulings that upheld the ACA and legalized gay marriage—with a record-low level of Republicans (18 percent) approving of the court and an all-time high 76 percent of Democrats approving,” Gallup reports.

Paul Larkin Jr., senior legal research fellow at The Heritage Foundation’s Edwin Meese III Center for Legal and Judicial Studies, wrote that Scalia’s death represents “the loss of one of our greatest legal minds, of a judge and justice who had made, and will continue to make, legal history.”