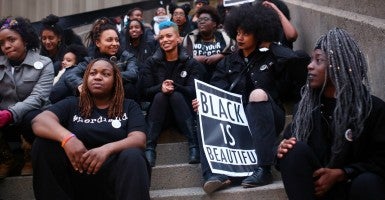 Conservative lawmakers call on Republicans to "do a better job of reaching out to the African American community." (Photo: Cole Burston/ZUMA Press/Newscom)

Conservative members of Congress think Republicans could improve on their outreach to the black community.

Rep. Justin Amash, a Republican from Michigan, said he “does his part to reach out,” but Republicans as a whole need to improve.

“What’s been missing on the Republican side is reaching out to the black community,” Amash said. “I think it’s important that we do more of that as a party, because we do have a lot to offer everyone. We’re about individual liberty and opportunity. This top-down, government-centered model has not worked for communities throughout our country.”

But while discussing the divide, Republicans didn’t just blame themselves.

“Some of us do reach out, [but] it never makes the media,” said Rep. Louie Gohmert, R-Texas, suggesting that the media bears some responsibility for the perceived lack of outreach.

Labrador doubled down, telling press that it’s “your job as a reporter to point out to this community what’s really happening under the rule of Democrat Party in their cities and in their neighborhoods.”

Labrador said that black communities also need to realize that they’ve been “sorely disappointed” by Democrat policies and that it’s time to come back to the Republican Party, “which is where they started.”

Rep. Dave Brat, who’s a former college economics professor from Virginia, built on that narrative, stating that Democratic values of big, centralized government don’t work. “No central planning government has ever succeeded over the long run,” he said.

That welfare gain is bigger than all public policy programs, all government programs across the world for the last 100 years. There’s no comparison. And how did China do that? They chose to go with free markets.

To better communicate conservative values of free-market principles to African-American communities, Brat said, “we need to get back to the fundamentals.”

To find common ground, Labrador also said he and other conservative members are “leaning” on issues like criminal justice reform that are very “near and dear” to minority communities to show how conservative policies can better their lives.

And Labrador, who is Hispanic, pointed out that out that the Republican Party isn’t exactly lacking diversity. Of the top four finishers in Iowa, he said, “there were two Hispanics, an African-American, and an orange man.”