Why Mike Lee Wants to Keep Women Out of the Draft 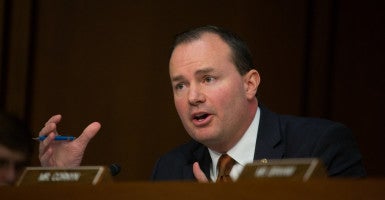 “We simply can’t trust this president or the courts to honor the law and protect our daughters,” Sen. Mike Lee, R-Utah, told The Daily Signal. (Photo: Jeff Malet Photography/Newscom)

Sen. Mike Lee, R-Utah, plans to introduce a bill that would prohibit women from being registered for a possible draft requiring military service.

Current law exempts women from registering with the Selective Service, but the issue was thrust back into national discourse following the Obama administration’s decision late last year to open all combat positions in the military to women.

Lee’s bill would reiterate that only men aged 18 to 25 are required to enroll, extending the ban on female registration separate from the administration’s combat policy. He plans to drop the legislation Feb. 22, his office confirmed Wednesday to The Daily Signal.

“We simply can’t trust this president or the courts to honor the law and protect our daughters,” Lee said in a statement to The Daily Signal. “We need new legislation making clear that if the United States is going to change this policy, Congress must be the one to do it.”

The U.S. government has not deployed the draft since 1973 after ending the nation’s involvement in the Vietnam War and converting the military to the all-volunteer service it is today.

In 1981, the Supreme Court upheld today’s law barring women from registering for the draft in its Rostker v. Goldberg decision, ruling that the statute was constitutional because women at the time were restricted from combat service.

But the rationale for the high court’s decision shifted in December, when Defense Secretary Ash Carter announced that, for the first time in U.S. history, all military positions would open to qualified women on New Year’s Day.

A Rasmussen Reports poll released Wednesday found that a majority of women—52 percent—oppose being required to register for the draft. Thirty-eight percent support enrollment, while 10 percent are undecided.

Amber Smith, a former Kiowa Warrior helicopter pilot in the Army and combat veteran of Iraq and Afghanistan, told The Daily Signal that “women should absolutely have to register for the draft” now that the Obama administration has lifted restrictions on women serving in combat jobs. Smith said:

There’s no such thing as partial equality. As long as women are able to try out for these combat jobs the same way men are, they should have to sign up for the Selective Service, the same way men do. What’s fair is fair. You don’t get to have it both ways.

Elaine Donnelly, president of the Center for Military Readiness, has a different perspective. “Requiring women to register for Selective Service is unequal and unfair to women and certainly harmful to the military,” Donnelly told CNS News.

“Ordering women into the same combat environment on the same basis as men is not giving them an equal opportunity to survive,” Donnelly added. “The most recent research backs up that fact.”

“Every American who’s physically qualified should register for the draft,” Neller testified during a Senate Armed Services Committee hearing.

Lee’s legislation would assert that the Constitution gives Congress the exclusive power to legally define who is required to register with the Selective Service, National Review reported.

Reps. Duncan Hunter, R-Calif., who served in the Marines, and Ryan Zinke, R-Mont., who served as a Navy SEAL, last week introduced a bill—the Draft America’s Daughters Act—to require women between 18 and 26 to enroll.

Both Republican lawmakers oppose the administration’s decision to open all combat positions to women and threatened to vote against their own bill should it make it to the floor. But they agreed that Americans deserve to hear congressional debate on the issue.

“It is absolutely necessary that the issue of Selective Service eligibility be exhaustively considered for the purpose of determining whether the American people truly want to send their daughters and sisters into harm’s way,” Hunter wrote Tuesday in an op-ed for the Marine Corps Times.

The White House has not announced its position on the issue. Carter said Congress should look into it.