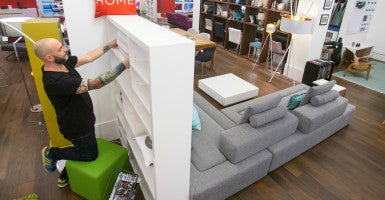 Americans could be out of luck next time they need to go buy a new couch, washing machine, or car. (Photo: Hannibal Hanschke/Reuters/Newscom)

According to the Consumer Financial Protection Bureau (CFPB), new regulations are necessary to protect helpless consumers from predatory lenders. The chief villain in the CFPB’s tale is the payday lender, but the new rules will impact much more than payday advances.

Every year, a variety of companies provide billions in credit through all sorts of small short-term loans that banks don’t provide. These products include, among others, payday advances, title loans, and what are traditionally referred to as installment loans.

All of these lenders are in stark danger of being put out of business, which means that millions of consumers won’t have access to credit.

Many of the companies that provide these loans, particularly installment loans, have been around for more than a century precisely because they help people. Consumers use all types of small-dollar loans to help with all kinds of expenses, some of which arise unexpectedly. These various forms of credit give people access to products ranging from appliances and furniture to rent and emergency vehicle repairs. This means Americans could be out of luck next time they need to go buy a new couch, washing machine, or car.

This means Americans could be out of luck next time they need to go buy a new couch, washing machine, or car.

All of these lenders are in stark danger of being put out of business, which means that millions of consumers won’t have access to credit. Still, the Consumer Financial Protection Bureau is proceeding under the faulty premise that these companies prey on people who can’t make their own decisions and who can’t possibly pay back what they owe.

In a recently released outline of their proposal, the Consumer Financial Protection Bureau estimated its rules could reduce (at least some segment of) the industry’s revenue by as much 84 percent.

Not surprisingly, the Consumer Financial Protection Bureau’s small business review panel suggested that more research is needed to guide a formal rule proposal. In particular, the panel recommended that the Consumer Financial Protection Bureau “seek additional information on potential impacts and consider certain alternatives that might reduce the burden on small entities.”

The evidence simply does not support the idea that small-dollar loan companies—even payday advance companies—are systemically trapping people in debt. The evidence does, however, show that they are regularly helping people get access to the credit they need.

The Consumer Financial Protection Bureau’s new rules are going to prevent millions of people from gaining access to credit, and Congress should do everything in their power to stop the CFPB.

The Consumer Financial Protection Bureau’s decision to move ahead with its rules is even more puzzling given that the CFPB’s own evidence doesn’t support its predatory lending claims.

From July 2011 to August 2015, consumers lodged approximately 10,000 complaints against payday lenders, some of which were likely made against scam artists posing as legitimate businesses.

Even ignoring that these are unverified complaints, the figure pales in comparison to the more than 12 million people per year using payday loan services. Put differently, four years of raw complaint totals represent less than one tenth of one percent of the number of annual payday loan customers.

How can this complaint rate possibly justify rules that might reduce 85 percent of an industry’s revenue?

Even if these complaints did support that a systemic problem exists in the payday lending industry (and they do not), there would be no justification for expanding these rules to other types of small-dollar loans.

But nevertheless, that’s what the Consumer Financial Protection Bureau is doing, and consumers will suffer as a result.