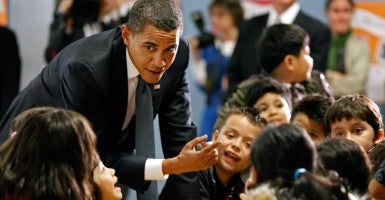 The Obama administration proposes to provide free lunch to millions of children who lose access to the subsidized meals once the school year comes to a close.

Under the program announced Wednesday, low-income families who are eligible for free and reduced-price meals during the academic year would receive an electronic benefits card loaded monthly with $45 per child. The benefit would go toward groceries during the summer months when school is closed.

The program will cost taxpayers $12 billion over 10 years if Congress accepts the proposal in President Obama’s 2017 budget request, scheduled to be submitted to lawmakers next month.

Those programs, Sheffield said, make up a portion of the nearly 80 welfare programs assisting low-income households through social services, medical care, and housing. The price tag is over $1 trillion a year.

“The measure of the welfare system’s success should not be its expansion, but all too often expansion seems to be the goal,” Sheffield said.

In 2010, she noted, Congress passed the Healthy and Hunger Free Kids Act with a provision that enabled all students residing in a high-poverty school district to qualify for free and reduced-price lunch, regardless of the child’s individual household income.

“The reality is, obviously, we still have millions of kids that are not getting the help and assistance they need,” Agriculture Secretary Tom Vilsack said Wednesday.

The Republican-led Congress likely will be wary of the $12 billion plan, however, particularly after the Department of Agriculture reported last year that it had doled out nearly $2.7 billion in “improper” payments associated with subsidized lunches during the 2012-2013 school year.

The episode led to increased scrutiny of the program by lawmakers.

Nearly 22 million children currently are enrolled in government meal programs during the school year. But, officials say, only a sliver of eligible students—3.8 million—receive subsidized lunches during the summer.

The administration expects that its proposal, called the Summer Electronic Benefits Transfer for Children, will help shrink this divide.

The program would phase in over 10 years, beginning in summer 2017. The Department of Agriculture projects that it will capture nearly 20 million students by 2026 who aren’t currently enrolled in a government meal program while school is out.

The administration also announced that the USDA would increase access to subsidized meals for low-income students by allowing states participating in the National School Lunch Program to use Medicaid data so they may automatically enroll qualified students for the free or low-cost lunches.

The current paper application process is arduous for families to complete and expensive for schools to process, The Washington Post reported.

“We know that the program works, and we want to expand it,” Vilsack told the newspaper. “Many children who are eligible for free and reduced lunch meals aren’t enrolled in the program—this is going to help ensure that they receive the benefits, too.”