5 Reasons Why America Is Headed to a Budget Crisis 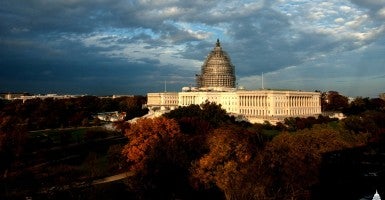 Spending, deficits, and debt are expected to expand significantly over the next decade, while entitlement and interest spending will continue to consume more and more of the budget.(Photo: USCapitol / Flickr)

On Tuesday, the Congressional Budget Office released its preliminary budget and economic outlook for 2016-2026. The report shows that despite temporary improvements over the past few years, the country continues to be on an unsustainable budget path.

From the report it remains clear that our nation is on the wrong path.

Spending, deficits, and debt are expected to expand significantly over the next decade

Spending, deficits, and debt are expected to expand significantly over the next decade, while entitlement and interest spending will continue to consume more and more of the budget. It is time for Congress to take steps toward fixing the country’s spending problem and put us back on a path to secure economic growth and opportunity for future generations.

Here are five key findings from the report:

This represents an increase of more than $2.7 trillion over the next 10 years, outpacing the growth of the economy over the same period of time. The largest drivers of growing spending are entitlement programs such as Medicare, Medicaid, Obamacare, and Social Security.

Another concerning factor is growing interest on the debt. Spending on interest has climbed steadily over the past several years and could soon surpass what is spent on national defense and other priorities.

If left unchecked, CBO projects that net interest spending will climb from its current rate of 1.3 percent of GDP in 2015 to 3.0 percent of GDP by 2026. If Congress’ last budget “deal” is any indication, there are no signs that lawmakers will get spending and borrowing under control anytime soon.

After a brief period of declining deficits over the past few years (reaching a six-year low of $466 billion last year), CBO projects that deficits will once again begin to rise for the first time since 2009 to reach trillion-dollar levels as soon as 2022 and approaching nearly $1.4 trillion by 2026.

It is important to note that the decrease of the past few years was a result not primarily of better policy by Washington, but rather of the winding down of excessive stimulus spending, the economy recovering from the 2008 recession, and tax increases imposed under President Barack Obama. Spending controls implemented by the Budget Control Act of 2011 helped some, too.

Just in the five months since the Congressional Budget Office last updated economic projections, the estimated 2016 deficit has risen an additional $130 billion, mainly due to the retroactive extension of expiring corporate and individual income tax provisions. With entitlement spending expected only to rise over the next decade, unless major steps toward reform are taken, deficits will continue to spiral out of control. In June, CBO reported that if left unchecked, under an extended baseline scenario, our national debt will rise to more than 100 percent of GDP within the next 25 years. The alternative fiscal scenario, a more realistic model, which assumes that longstanding provisions of law scheduled to expire will be extended and other laws will be modified over time, projected that debt would reach 175 percent of GDP over the same period of time.

The latest report does nothing to paint a brighter future, stating that if current laws were left unchanged, debt held by the public would reach 155 percent of GDP within the next three decades, an amount higher than ever before recorded in the United States.

The number would be even more staggering under the alternative fiscal scenario. If action is taken now, there is still time to get the economy back on the right course and avoid this outcome.

If Congress continues to kick the can down the road, however, and avoids serious reforms, the debt will balloon out of control, and the consequences will be devastating.

According to the report, over the next ten years, revenues will average 18.1 percent of GDP, 0.7 percent higher than the 50-year historical average. Increasing deficits and debt are being driven by too much spending, not too little taxation.

Congress should work toward solutions that cut taxes and get revenues down to their historical average, which would free up resources to grow the economy.

Despite the low unemployment rate, CBO says that policies such as Obamacare and “real bracket creep” (when wages grow faster than inflation, workers’ move into higher tax brackets) are reducing the supply of labor. Additionally, CBO lowered its outlook for total factor productivity growth.

This means CBO expects the combination of workers and the machines and technology they use to produce less than previously estimated. With less output, CBO projects that real GDP will be $700 billion lower in 2026 (in real, 2015 dollars).

Over the 10-year period, this amounts to trillions of dollars in lost output and income for the U.S. economy and its workers.

One thing is clear, as put by Heritage Grover M. Hermann Fellow, Romina Boccia: “The next president simply must lead on entitlement reform upon entering office.”