Find Out How Much Obamacare Rates Increased in Your State 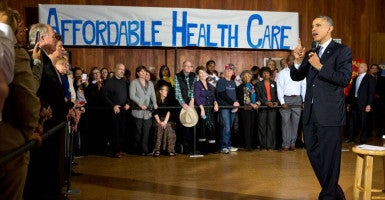 "We need to get government regulations out of the way," Freedom Partners official Nathan Nascimento said. (Photo: Pete Souza/Zuma Press/Newscom)

Premiums under the Affordable Care Act will rise in nearly every state this year, spiking health insurance costs for nearly all Americans, according to a new report.

All states, with the exception of Mississippi, saw the cost of health insurance premiums increase for 2016. And in most states, Americans using Obamacare’s individual marketplace to purchase insurance saw premium costs rise by double digits.

Freedom Partners, a nonprofit organization advocating free markets and limited government, reported that four states—Minnesota, Alaska, Tennessee, and Hawaii—will be hit with average premium increases of 30 percent or more. Another 17 states will see spikes of at least 20 percent.

“In many states, insurers are finding increased costs and burdensome mandates under the law to be unsustainable, and are exiting the marketplace altogether,” Nascimento told The Daily Signal, adding:

Others are facing a variety of harmful side effects of Obamacare, with young, healthy people opting out of coverage or finding their plans unaffordable and dropping out before the end of the year.

Alaska faces increases around 39 percent, Tennessee around 35 percent, and Hawaii around 30 percent.

The only state where premiums are expected to fall is Mississippi. Those who reside in the Magnolia State can expect a 0.2-percent drop.

Drew Gonshorowski, a senior policy analyst at The Heritage Foundation who tracks premium increases under Obamacare, said costs also may be rising because insurance companies initially priced their plans too low.

“Every year, historically, premiums have gone up a decent amount,” Gonshorowski told The Daily Signal. “But in these cases, a lot of this has to do with some insurers coming into the market a little lower than what they had thought was reasonable and now they’re trying to recoup losses.”

He also attributed the premium increases to individuals who enrolled in the insurance exchanges while less healthy than insurers predicted.

“There is some evidence that utilization is up from this population, and if people use their health insurance more, or use their health providers more, it costs the insurers more,” Gonshorowski said.

It also causes insurance companies to pay out more than anticipated, he said, so they have to raise premiums to compensate for the losses.

The biggest issue with the Affordable Care Act, he said, is that the law puts restrictions on how insurers can price plans in the market.

“A repeal of the ACA would take away these restrictions,” Gonshorowski said. “They would allow insurers to price more flexibly and actually price to the cost of their enrollees. The evidence shows that that would bring premiums down.”

Nascimento said that although repealing the health care law would “eliminate the excessive mandates and regulations” spurring premium increases, a repeal alone would not be enough to fix the health care system:

We need to see further free-market reforms to truly lower costs for all Americans. Broadly, we need to get government regulations out of the way and truly reform how health care is delivered by eliminating barriers to care and unshackling providers.

But it isn’t just premiums that are increasing. Gonshorowski said that based on his own research with Heritage, the cost of deductibles also is rising.

He said the best thing Americans who are facing more expensive health care costs can do is shop around on the marketplace to look for cheaper options.