ISIS Fails to Achieve Its Goals With Indonesian Terror Attack 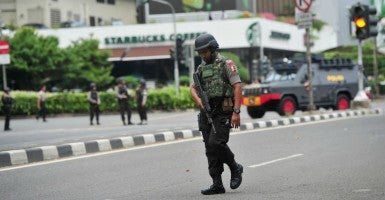 ISIS has claimed responsibility for the terrorist attack in Jakarta, Indonesia, this week that claimed two innocent lives and left 20 injured. This is the most significant attack in Indonesia since 2009. With all condolences to the victims, one thing is for sure: The terrorists will lose this round, too.

The Indonesian people are nothing if not resilient.

It is a very difficult calculation to make, but ISIS may have actually come out on the losing end of this one attack itself. Five of the attackers are dead. And for all the momentary mayhem, all reports seem to indicate life returning to near-normal in the area of the attack remarkably quickly.

If the numbers don’t matter and what really counts is the sense of terror that the attacks produce, the perpetrators seem to have failed on both scores. Beyond this, and as importantly, there must be a great deal of intelligence to gather in the aftermath of the attack—intelligence that could contribute to winding down the ISIS threat in the same way that Indonesian authorities disrupted and wound down terrorist networks since the 2009 attacks on the Marriott and Ritz Carlton.

Indonesia does face a real threat from ISIS. It may have as many as 300 of its citizens fighting in Syria and Iraq. And at home, it has several pro-ISIS groups to contend with, one of which controls a very small and remote (but symbolically important) bit of the sprawling archipelago. This latest attack, in fact, may bring the two ends of the threat, domestic and foreign, together. Reports indicate that the attack may have been organized by an Indonesian citizen, who is currently the leader of the Southeast Asian unit of ISIS, fighting in Syria.

Indonesia also has a history older than ISIS and al-Qaeda of dealing with terrorists. It has done so successfully throughout its brief history as an independent nation, even as it has grown and modernized its economy and become after 1998 a full-blown democracy.