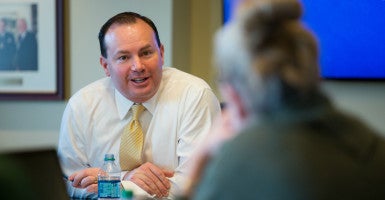 Seeking to settle a dispute that threatens to block bipartisan progress toward a deal on criminal justice reform, the Senate’s conservative leader on the issue is downplaying the hurdles to reaching an agreement.

A day after Goodlatte, R-Va., roiled debate on the issue, Sen. Mike Lee, R-Utah, assured that the dispute over the criminal intent requirement—known as “mens rea,” the Latin phrase for “guilty knowledge” or “guilty mind”—could be resolved “relatively easily.”

“There is a difference, but it’s a relatively minor difference [between] the mens rea element that’s in the House version and not in the Senate version,” said Lee, who spoke Wednesday with reporters at The Heritage Foundation to reflect on President Barack Obama’s final State of the Union address.

“We’re not talking about sweeping, drastically different bills,” Lee said. “It could be worked out relatively easily.”

As expected, Obama in his State of the Union specified a deal on criminal justice reform as a main priority for 2016. Both Goodlatte and Lee share that ambition, and they’ve helped their respective judiciary committees pass bills reforming the criminal justice system.

The full House and Senate have not yet taken up legislation on the issue.

But a piece of the House legislation contains a controversial provision that would change the U.S. criminal code to make more laws subject to proof of criminal intent, meaning it would require prosecutors to prove that certain criminal suspects knowingly intended to break the law.

The Senate Judiciary Committee’s reform legislation, co-authored by Lee, does not add such requirements.

In addition, the White House is opposed to expanding the requirement to prove criminal intent, arguing it would make it harder to prosecute corporations that commit fraud, taint food, or pollute the environment because the accused could simply say they didn’t intend to break the law.

While the centerpiece of the criminal justice reform effort is a bipartisan effort to reduce mandatory minimum prison sentences for low-level drug offenders, Goodlatte suggested that many of his colleagues won’t agree to ease drug penalties unless the bill contains the provision requiring prosecutors to prove criminal intent.

“I think a deal that does not address this issue is not going anywhere in the House of Representatives,” Goodlatte said during an event at The Atlantic.

The remark rankled advocates, who hope Congress will agree on a criminal justice reform early this year so they can send it to Obama before the 2016 presidential campaign heats up.

Lee sought to calm the angst.

“If we could get both chambers to put [a] bill on the floor, it would pass,” the Utah Republican said. “And we could work that out [the differences] in a conference committee [between the House and Senate].”

And in an old-fashioned nod to the White House, Lee signaled that Obama is proving flexible as a way to find common ground on an issue both the legislative and executive branches want to address.

“On this issue, he [Obama] has expressed an interest with working with Congress, and I think he means it,” Lee said, adding:

I think his efforts by and large have been helpful. His Justice Department and many of his top Justice Department officials have provided a lot of support for it—not just rhetorically, but also by gathering statistics. In many ways, he’s been helpful, just helping people understand what the effort does and doesn’t do.