How the Left Misreported the Number of Voting Americans Without IDs 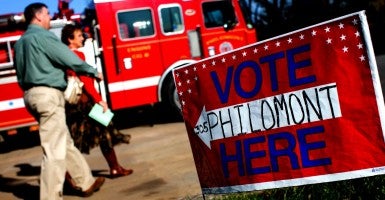 Don Palmer is the Former Secretary of the Virginia State Board of Elections and Florida Director of Elections.

The use of photo identification to confirm the identity of voters serves an essential election security function in America’s polling places and boosts citizens’ confidence in the voting process. In perhaps their most prevalent means of attack, opponents of laws requiring photo ID greatly exaggerate the number of voters without a valid ID.

In legislative, litigation, and public relations battles, opponents use wildly inflated numbers in an attempt both to portray these laws as burdensome and to gain partisan advantage.

Opponents of photo ID cite a highly inflated number of voters who do not possess a driver’s license as the universal number of those who are not able to vote, even though, under all state photo ID laws, various other forms of ID, such as federal and state government IDs, U.S. passports, tribal IDs, and even employer-issued or university student IDs, are also acceptable.

This tactic of inflating the number of ID-less voters began years ago with the debate surrounding and subsequent litigation challenging Indiana’s photo ID law, which the U.S. Supreme Court upheld in 2008 in a 6-3 decision and which continued in Georgia, Wisconsin, and other states.

In the Indiana case, Crawford v. Marion County Election Board, the plaintiff submitted an expert report estimating that as many as 989,000 registered Indiana voters did not possess an ID.

However, a simple comparison of Census voting-age population data to the state driver’s license records showed that only 43,000—or approximately 1 percent of voters—did not possess a state-issued driver’s license or ID card, and that number ignored Indiana’s inflated voter rolls, other acceptable forms of ID possessed by voters, and voters who did not need an ID to vote.

A majority on the U.S. Supreme Court refused to rely on sketchy and incomplete statistics and quoted the district court opinion that the numbers provided by the plaintiff’s expert witness were “utterly incredible and unreliable.”

The challenge to Georgia’s photo ID law came on the heels of Crawford. In that case, the plaintiffs used incomplete and unreliable data to claim that “between 289,000 and 505,000 [Georgia] voters lack a photo identification issued by the Department of Driver Safety” and claimed that it was “implausible” that these voters would have another form of valid ID.

In upholding Georgia’s photo ID law, the Eleventh Circuit Court of Appeals rejected both contentions, noting errors and inaccuracies in the match between the driver’s license records and the list of registered voters, among other problems.

In an ironic example of the multiple matching errors, the court noted that the district court judge himself “erroneously appeared on one of the data match lists as not having a driver’s license.” The report was found to be so riddled with errors that the court excluded it as evidence.

The importance of getting an accurate estimate of those who lack a valid, acceptable photo ID was on display in Frank v. Walker, the now-dismissed Voting Rights Act challenge to Wisconsin’s photo ID law.

The plaintiffs’ expert witness, a “marketing consultant,” estimated that over 317,735 or approximately 9.4 percent of registered voters in Wisconsin lacked either a driver’s license or a state ID. In Walker, the federal district court judge accepted that highly suspect statistic to distinguish the Wisconsin law from the Indiana ID law upheld in Crawford.

Ultimately, the Seventh Circuit Court of Appeals reversed the district court. In his opinion, Judge Frank Easterbrook criticized the district court’s conclusions as to the supposedly large number of individuals without ID as “questionable.” The Supreme Court declined to review the case, and the Wisconsin photo ID law went into effect.

All the plaintiffs in the Wisconsin, Georgia, and Indiana cases overstated the number of potential voters without a valid ID to vote. In these cases, the courts ultimately were wise enough to see through the unreliable statistics and incomplete or nonexistent comparisons of state voter registration lists with state and federal databases of citizens who possess forms of ID other than driver’s licenses.

Bad data and faulty statistics also have a negative impact on public debate. Opponents have worked very hard to change the perception of photo ID from being a positive commonsense election administration reform, supported by a majority of the public and recommended by experts such as the bipartisan Commission on Federal Election Reform (otherwise known as the Carter-Baker Commission), to involving the reimposition of “Jim Crow.”

Often the media do not accurately report voter ID statistics. For example, even though both the data and reasoning used by a Wisconsin district court judge were later criticized as “questionable” by the Seventh Circuit, the statistics cited by that judge are still widely circulated by ID opponents and by media outlets such as MSNBC in reports about photo ID in Wisconsin.

The use of wildly inaccurate and misleading data inhibits a rational legislative or policy debate on the likely effect of photo identification laws and bleeds into the debate about other important election reform proposals across the country.

Policymakers and the public deserve to hear the truth about the relatively small universe of affected voters, not inflammatory and inaccurate assertions that hundreds of thousands or millions of voters are going to be negatively affected by such laws.

If you would like more detailed information on this issue, you may be interested in reading a new Heritage paper entitled “Faulty Data Fuel Challenges to Voter ID Laws.”