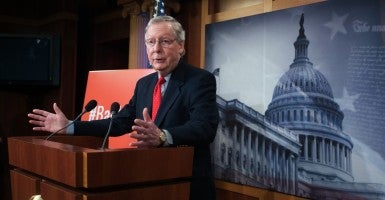 McConnell is incorrect to assume that Democratic obstruction through the filibuster will cease by eliminating one opportunity to filibuster. (Photo: Michael Reynolds/EPA/Newscom

After another year of a messy appropriations process, which left only Democrats happy, Senate Republican leadership is proposing to eliminate a senator’s right to filibuster whether or not the Senate ought to consider an appropriations bill.

This is no small thing.

Appropriations bills control the amount of money that the federal government spends every year, and critically, they also instruct how that money should be spent through the use of “policy riders.” Thus, whoever controls the appropriations process controls the policies under which billions of dollars in federal money are spent.

Sen. Mitch McConnell, R-Ky., argues that eliminating the filibuster on appropriations bills will bring order to what has become a dysfunctional process. On its face, this seems intuitive, since Democratic threats to filibuster last year did, in fact, partially shut down the appropriations process.

However, unpacking McConnell’s proposal reveals that it is a flawed and blatant attempt to centralize power in the hands of a few. Even worse, the proposal would do long-lasting damage to the institution while doing nothing to address the underlying problem.

Inequality in the Senate

The consequences of McConnell’s proposal are precarious for those who prioritize transparency and equal participation in governing. To put it plainly, eliminating the filibuster on appropriations bills would result in the most powerful Appropriations Committee—and party leadership—that the Senate has ever witnessed.

By allowing an expedited process for appropriations bills (and not for other legislation), this proposal would create a class of senators that have additional rights. By removing a basic procedural hurdle, McConnell’s proposal ensures that Appropriations Committee members would only have to seek the bare minimum consensus of their colleagues to move forward with their legislative priorities.

Between the sign-off of a handful of committee members and party leadership (it should be noted that McConnell is a member of both), the leverage of other senators to negotiate for their policy priorities would be significantly reduced. The Senate is a body characterized by the equality of members, and thus the equality of the states they represent.

On the Senate floor, everyone is equal. The proposal by McConnell would change this, and in doing so, fundamentally transform the nature of the Senate.

Suddenly, all the policies that the Senate leadership determines are important will be put into appropriations bills and advantaged by an expedited process. The regular path for legislation will therefore becomes meaningless.

Policy priorities would solely be determined and passed by a handful of legislators, while the rest are benched unless they can curry favor with a select few.

Eliminating the Filibuster Will Not Bring Back Order to the Senate

McConnell is incorrect to assume that Democratic obstruction through the filibuster will cease by eliminating one opportunity to filibuster.

First, Democrats will still have numerous other opportunities to filibuster appropriations bills—particularly when it comes to amendments and final passage of the bill itself. Democrats have shown a willingness to allow the Senate to proceed to a bill, only to block the Senate from full consideration by failing to vote for cloture on the back end.

As recently as November of last year, Democrats allowed the Senate to proceed to the transportation appropriations bill—only to force the bill to be withdrawn when they balked at having to vote on a germane amendment offered by Sen. Rand Paul, R-Ky.

Regardless of eliminating the filibuster on proceeding to the bill, Democrats will continue to obstruct consideration of appropriations bills to avoid difficult votes and policy outcomes. To eliminate the filibuster in the manner McConnell suggests will ultimately do nothing to stop that.

Second, this attempt to eliminate the filibuster is an effort by Senate Republican leadership to solve a problem of their own making. McConnell has bemoaned Democratic obstruction as the reason appropriations bills were not completed in 2015. Specifically, he points to the fact that the two cloture votes required for appropriations bills allow Democrats to drag out the time available to them, holding up appropriations on process votes.

However, it is not the two cloture votes that are the problem. Senate Republicans control the Senate floor schedule and had every opportunity and the authority to make the time available for the passage of appropriations bills. Instead, McConnell made the conscience decision to focus on other legislation—reauthorizing the Export-Import bank, passing a highway bill, and approving the president’s nuclear deal with Iran. The failure to pass appropriations bills is less about obstruction by the Democrats and more about a failure of prioritization by those who run the Senate.

Finally, the roots of disorder in the Senate are far deeper than the filibuster. The increased use of the filibuster is a direct result of the choke hold Senate leadership has placed on individual senators.

The McConnell-Reid era has seen an unprecedented level of control exerted from the leader’s office that has stifled the rights of senators to participate in the legislative process through amendments and negotiation. When everything is decided in the leader’s office, individual senators are left with one outlet to exercise their right—the filibuster. It is therefore no surprise that there has been an increase in these aggressive tactics, as members seek the simple right to be heard.

Until the Senate returns to an open process that prioritizes transparency over secret deal-making by a chosen few, the Senate will continue its slide into dysfunction. No amount of meddling with the filibuster will solve a problem that is fundamentally a failure to lead.

It’s Not the Form; It’s the Fight

McConnell has argued that eliminating the filibuster on appropriations bills will allow the Senate to consider 12 individual appropriations bills, rather than an omnibus or a Continuing Resolution, which will give Republicans more leverage, and thus the ability to gain more concessions. However, recent history does not support this claim.

In fact, Sen. Reid, D-Nev.; House Democrat Leader Rep. Nancy Pelosi, D-Calif.; and even President Barack Obama publicly gloated about getting everything they wanted out of the Republican-led bill. Sen. Chuck Schumer, D-N.Y., told reporters, “Almost anything the Republican leadership in the Senate achieved this year, they achieved on Democratic terms… Democrats had an amazingly good year.”

The one prize the Republicans came away with was authorization for oil exports—a policy they likely would have gotten anyway, and one that came at the expense of policies to defund Planned Parenthood, to repeal Obamacare, and to take power back from the Environmental Protection Agency, as well as nearly every other policy they sought to include.

The form of the bill matters little if the GOP lacks the will to fight for any of its priorities.

The economist Frédéric Bastiat referred to the “seen and the unseen” when discussing economic costs. In a body where no movement occurs in a vacuum, it seems prudent to ask—what is the unseen cost of McConnell’s proposal?

Changing the Senate rules, as McConnell seeks to do, requires 67 votes, and McConnell has committed himself to respecting that process. However, there are only 54 Republicans in the Senate. This simple fact acknowledges that support from Democrats will be required if McConnell is to pass his proposal.

This raises the obvious question: Why would Democrats provide the crucial support to pass a policy that will curtail some of their rights as the minority party, and make it easier for the GOP to pass bills which they oppose?

There are only two reasonable answers. First, they will support it because they know they’ll be able to block bills on additional cloture votes anyway. And second, they think they’ll be in charge next year, and what’s better than the opposing party neutering themselves in advance?

Let the Senate Work Its Will

Republicans rightly acknowledged that the Senate was broken under Reid.

Would anyone have said then that the answer to the problem was to give Reid more power?

Of course not. The same is true for McConnell. As the history of the Senate has demonstrated so many times, the institution works best when individual members are empowered to exert their rights on the Senate floor—not when they are dictated to from the Office of the Majority Leader.

The Senate is an institution that has sustained itself through centuries of divided politics, civil war, and social upheaval. Disagreements about policy riders do not justify transforming the way in which the Senate does business, nor do they require the micromanagement of party leaders. The Senate will function when individual senators are allowed to work—to debate, deliberate, negotiate, and come to consensus. To assume otherwise exudes an arrogance that is as perilous to the Senate as it is the expression of the democratic will.