How the ‘Green Revolution’ Has a Backward View on Economic Growth 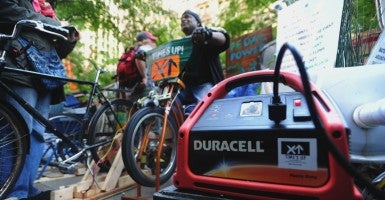 A man pedals a bicycle to generate power for a generator in New York City. (Photo: Bryan Smith/ZUMAPRESS/Newscom)

One of these, called the SolarSoundSystem, involved people pedaling stationary bicycles in order to run generators. While this may seem fun for a while, it provides an important glimpse into the benefits of the affordable, reliable energy we derive from natural resources in coal, oil, and natural gas. One article described the mission of the SolarSoundSystem:

Since its inception in 1999, the SolarSoundSysytem sound project uses renewable energy and offers a unique approach, cultural and festive energy issues. With amplified music in public space and powered by renewable systems (generators bicycles and solar panels), the project brings together playfully artists, DJs, engineers and the general public around the energy issue.

While I enjoyed many of the exhibitions at the Paris conference (and believe people should have the prerogative to design and sell whatever they want), the curmudgeon in me couldn’t help but think about how conventional fuels make our lives so much easier, comfortable, and productive.

For instance, we don’t need people pedaling bikes to play music, watch TV, use our laptops, or even heat our homes. We can simply plug a cord into a wall or use a battery, and voilà: music! Those cyclists don’t have to pedal a bike for a job; they can go be more productive elsewhere in society.

The use of natural resources has made our lives dramatically better and made people more efficient. Mechanization powered by conventional fuels during the Industrial Revolution changed how people accomplished tasks and how people lived their lives.

Consequently, the use of coal, oil, and natural gas helped produce tremendous societal gains in terms of improved standards of living, higher life expectancy, less infant mortality, and all of the other variables we use to measure quality life.

Fertilizers derived from natural gas improved the productivity of agriculture. Entrepreneurs developed new medical techniques and medicines using oil and synthetics. The use of oil and coal as a transportation fuel meant we could trade easier and trade farther.

Fast forward to today, and we take for granted how comfortable and useful these fuels make our lives. Most of the activities we do, the food we eat, the entertainment we enjoy, the clothes we wear, and the products in our houses use conventional fuels in one form or another.

The classic line of thinking from the green movement is that companies like the SolarSoundSystem will grow the economy. A statistic often touted by the renewable industry is that windmills and solar panels employ more people per kilowatt-hour produced, therefore they’re more beneficial to the economy.

Seeing the SolarSoundSystem in Paris reminds me of a picture my colleague David Kreutzer used in testimony to debunk this green stimulus argument. He said:

Attached is a copy of a page from a 1945 issue of Mechanix Illustrated. It shows a cyclist pedaling a jerry-built generator to power hair dryers in a Parisian beauty salon. Though not the sort of green job that is currently talked about, this human-powered generator illustrates why costly energy policies are not a stimulus.

A person on a bicycle generator would do very well to average 150 watts of output during a day. At this level, a modern-day cyclist-generator could produce electricity worth 10-15 cents per day at retail prices. With sufficient subsidies, people could be induced to power such generators and the proponents could then point to the “green ” jobs that have been “created.”

What is not seen is the value of the cyclists’ forgone output elsewhere. Even at minimum wage, the value of the labor is $52.40 per day. So each human-powered generator would shrink the economy by over $50 per day. This is not an economic stimulus.

Alternative energy schemes that require subsidies or that require protection from competing with conventional sources of power cannot be economic stimuli–their output is worth less than their inputs. An industry whose inputs cost more than its output is making the economy smaller and will necessarily reduce overall income.

More than 70 years after Mechanix Illustrated took that photo of a cyclist in a Parisian beauty salon, the same wrong-headed economic thinking exists.