Retracing a High, Desperate Flight at Below Zero Near Mount Everest 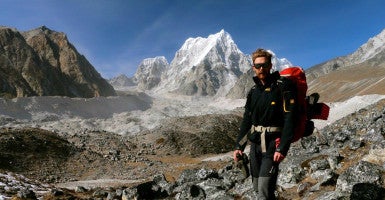 Complete, abandoned isolation: The author, Nolan Peterson, on the hike to the Nangpa La pass used by Tibetan refugees until China closed it. (Photo: Nolan Peterson / The Daily Signal)

NAMCHE BAZAR, Nepal—The hike to the Nangpa La refugee route was not an easy one. I felt fine and strong, but the weight of my pack took its toll, and the altitude often left me short of breath.

I carried, among other things, a tent, a sleeping bag, a gas stove, clothes, food, a first aid kit, crampons, and a DSLR camera.

Nights in the tent were bitter cold. Hauling a heavy pack in the altitude up above 17,000 feet was—to put it modestly—tiring. But the corporal excesses of easy living melted away with the miles and the altitude.

Blisters became calluses. Sunburns turned to tan. Sore muscles became stronger ones. The body hardened to the task as the days went on.

>>> This is Part 2 of Nolan Peterson’s three-part account of his trek to an age-old Himalayan trade route used by refugees.  Read Part 1 here and Part 3 here.

I was headed for the Nangpa La, a pass that bridges the Himalayas between Nepal and Tibet.

The trail was rough, meandering, and at times hard to identify. This ancient, nomadic route has been practically abandoned by Tibetan refugees under China’s eye for the past six years, and parts have faded into the wild terrain because of the unending erosion of wind and snow.

Landslides from the two massive earthquakes that hit Nepal in 2015 also have wiped out some sections of the trail, leaving no choice but to skirt along steep, crumbling cliffs. You can only hope the ground will support your weight as you nervously peer down hundreds of feet of exposure.

A fall here would be fatal. Even if you survived the tumble, a broken leg or ankle would likely be a death sentence in this remote section of the Himalayas. As the tagline from the movie “Alien” says, in this place “no one can hear you scream.”

Intermittent clues to the path’s history sprang up along the way. Nomads and refugees had built stone huts and walls as shelters from the wind at various points. At these abandoned campsites I found disintegrated sneakers, the soles worn through, and tattered jeans and T-shirts. I also found a shattered porcelain vase with Chinese lettering, as well as food wrappers and soda cans with labels in Chinese.

Yet there were no active signs of man’s existence. It was complete, abandoned isolation.

It was, in fact, quite eerie to have this massive place all to myself as I traveled within a pantheon of jagged, earth-tone cliffs beyond which towering, burning white peaks touched unbelievable heights. I was lucky with the weather. The days were perfectly clear, giving all the colors a supernatural radiance, highlighted by the hyperclarity of the thin, high-altitude air. At high altitude, one can see the sky fade to black. (Photo: Nolan Peterson/The Daily Signal)

Looking beyond the tops of peaks that reached as high as jetliners fly, I could see the dark blue sky begin to fade to black.

Mountain ranges like the Himalayas are an unfamiliar visual experience; your mind struggles to understand the scale of what your eyes are reporting. All you can do is observe in appreciative silence, imprinting the memories as permanently as possible.

“Through footless halls of air … up, up the long, delirious, burning blue,” I found myself reciting, recalling the John Gillespie Magee poem, my days as an Air Force pilot, and familiar sensations of altitude and freedom.

Still, a grounding reality marked my time in the mountains. During the cold nights and the hard work of each day’s walk, my thoughts often drifted to the hungry, tired, and scared Tibetan refugees who accomplished the same journey in jeans and tennis shoes. More humbling is that the refugees’ journey was doubly long, since I did only a round trip to the pass and back on the Nepal side.

The refugees must have suffered terribly. Like Pasang Nuru Sherpa, who made the trek in 1975 when he was 23, they didn’t have my fancy mountaineering clothing, a tent, or a portable stove on which to cook hot meals. Or my stash of protein bars, for that matter.

They hiked at night, fearing Chinese border patrol troops who will shoot refugees on sight. Unable to use flashlights, the refugees linked arms so as not to lose each other in the darkness. They used socks as gloves. They used duct tape and needle and thread to hold together their disintegrating footwear. During the days, they tied strips of black trash bags over their eyes to protect from snow blindness.

I wondered if this untamed landscape and its proximity to the heavens had inspired in the Tibetan refugees the same lofty, waxing poetic sensations that I had felt. More than likely, however, physical suffering and the continued threat of being incarcerated and sent back to China kept their eyes and minds firmly planted on the earth.

End of an Era

The Khumbu region of Nepal is home to the Sherpa people. The Sherpas ethnically descended from Tibet and are famous as high-altitude porters and climbers. They have been essential to Mount Everest expeditions dating from George Mallory’s attempts in the 1920s. (Mallory was the British climber who famously quipped, “Because it’s there” when a journalist asked why he wanted to climb Everest.)

The mountain region in which the Sherpas live is devoid of any sort of wheeled transport. Only well-worn footpaths, centuries old, connect the myriad villages and Buddhist monasteries within the Khumbu. Everything from medicine and food to building supplies is hauled in on human or animal backs. And until about 2009, a good deal of supplies flowed across the Nangpa La.

Six years ago, the center fields of Namche Bazar were covered in Tibetan traders’ tents. It was an eclectic market of knock-off mountaineering clothing, yak wool blankets, meat, jewelry, and Buddhist talismans.

“It was wonderful to arrive in Namche Bazar and see all the lower fields near the big stupa completely covered in mats and beautiful carpeting,” said Lorenzo Gariano, the Italian mountaineer spearheading the rebuilding of the school in the earthquake-rocked village of Thame.

“It wasn’t like a Friday market,’ Gariano said, ” it was a continuous flow of caravans coming backwards and forwards, sending their goods.”

And stealthily flowing behind the yak trains and nomads crisscrossing the Nangpa La was an undercurrent of Tibetan refugees, as many as 2,000 to 3,000 a year, who escaped China across the high Himalayas. Today, both the obvious and the furtive evidence of the porous Himalayan border have vanished. Trade has ended across the Nangpa La, and so has the flow of refugees. The annual number of Tibetan refugees to reach Nepal has dropped to around 200 (with none coming across the Nangpa La),  about 7 percent of the pre-2009 refugee flow.

Now, all of the Khumbu region’s supplies are hauled in by porters and yak trains originating from the Lukla airport or from the trailhead in Jiri, a full week’s walk from Namche Bazar along a trek that tortuously cuts up and down a meandering river valley like a sine wave.

Tibetan yak trains and their gold-toothed, ponytailed drivers are absent from the trails lining the Bhote Khoshi River valley’s steep, rocky walls. The trading places in Namche Bazar are empty.

“They [China] completely closed the border, not from here, but from the Tibetan side,” said Anu Sherpa, 69, a former mountaineering Sherpa who has worked on peaks like Mount Everest and Pumori. He is a lifelong resident of Namche Bazar, where he spoke to me from his mountaineering equipment shop.

“When the Tibetans come without permission, they go to border jail or maybe somewhere else,” he said. “Some people they shoot, the Chinese do.”

During my return trek from the Nangpa La, I stopped in Namche Bazar for a couple days to learn about what life had been like when the pass was open. Admittedly, a yak burger and an Everest beer were also on my mind. On my return to Kathmandu, I visited the Tibetan government-in-exile’s headquarters there to get an update on the current condition of the Nangpa La.

The people I spoke with in Namche Bazar and Kathmandu included Tibetan traders, refugees, Sherpa mountaineers, and lodge and shop owners.

They explained how before 2009 Tibetan refugees were hustled into Namche Bazar at night and hidden in the Buddhist monastery and private homes to avoid detection by a nearby Nepali police post. After a few hours of rest, the refugees would leave in the dark to continue their trek to Kathmandu, Nepal’s capital.

“The refugees would come at night and escape early in the morning to Lukla,” Anu Sherpa said.  “In the winter, they would come with their hands frozen.”

Those who made it across the pass often suffered from serious injuries because of the extreme cold and their inadequate clothing.

“The major injuries include frostbite because they don’t have the proper clothes. And they don’t have sunglasses, so they are snowblind,” said Tashi, a 30-year-old Tibetan refugee who fled across the Nangpa La in 1999 when he was 14. He asked me not to use his last name to protect relatives still living in Tibet.

To get past Chinese troops monitoring the border, Tashi concealed himself within a Tibetan trade caravan. He said:

There were Chinese troops, but I went with Tibetan yak traders. I pretended I was one of them. It was spring, so the glacier was melting, and it was dangerous. The crevasses were very wide, and sometimes we would sink into the snow.

After arriving in Nepal, Tashi settled in Thame with relatives. He now works at the Tibetan government-in-exile’s offices in Kathmandu.

“When I was young, many Tibetans came across the pass,” he said. “It’s very difficult nowadays. The Nangpa La is totally closed.”

Next: What could happen if China relaxes its grip on the mountain pass.