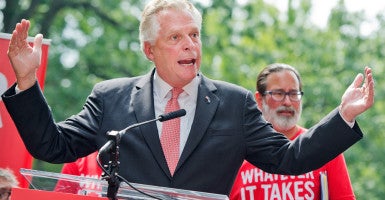 The Washington Post flip-flopped on a Medicaid gimmick that Gov. Terry McAuliffe is trying to push in Virginia. (Photo: Tom Williams/CQ Roll Call/Newscom)

Jason Yaworske is a legislative strategist for Heritage Action for America. His portfolio includes health care, budget, and judiciary issues. He works with The Heritage Foundation and with others on and off Capitol Hill to advance a conservative agenda.

The Washington Post editorial board has long considered itself the “adult in the room” on fiscal matters, all but endorsing the Simpson-Bowles plan and other trendy fiscal proposals. It also allied itself with respectable centrist groups like the Committee for a Responsible Federal Budget in calling out Congress for engaging in budget gimmicks to hide its spending appetite.

However, a major recent flip-flop from the paper’s editorial writers should turn heads and spark action in Congress.

The issue at hand is a budget gimmick used by states regarding Medicaid provider taxes. In truth, this gimmick could more accurately be referred to as straight-up fraud (were the federal government not complicit in it).

Here’s how it works: Under Medicaid, the federal government promises to reimburse states for a majority of their Medicaid spending, most of which involves reimbursements to health care providers. Therefore, states collude with health care providers in the following manner: They tell providers that they will tax them (so-called “provider taxes”), bringing in more revenue to the state.

The scheme is so complicated that even a visual flow chart doesn’t quite do it justice. But the impact is very real: States can bilk federal taxpayers to expand their Medicaid programs and enrich their providers at no cost to themselves.

Why is this important now? Well, because this is exactly the budget gimmick that Virginia Gov. Terry McAuliffe (and other states around the country) is attempting to exploit to badger his legislature into accepting a “cost-free” Medicaid expansion under Obamacare.

McAuliffe, a Democrat, is hardly alone. In fact, in July 2014, the Government Accountability Office warned of “states’ increased reliance on funds from health care providers” to fund their Medicaid programs at the federal government’s expense.

Here’s where The Washington Post comes in: In 2012, The Post called this action “manipulat[ive]” and favorably cited Sen. Richard Durbin, D-Ill., who called it “a bit of a charade.” In fact, the paper called cracking down on this gimmick a “much-needed Medicaid reform.”

Fast-forward to 2015, and now that this budgetary charade would allow neighboring Virginia to dump the cost of its Medicaid expansion on the federal government, The Washington Post is changing its tune, calling the gimmick “fiscally sound, humane, and elegant.” You can’t make this reverse-NIMBYism up.

If conservatives want to address Obamacare’s second-largest cost and largest coverage expansion, Medicaid provider taxes should be high on their target list. And Congress is more than capable of shutting down this spigot.

Back in 1991, Congress passed legislation (P.L. 102-234) restricting the use of provider taxes to finance Medicaid spending. More needs to be done, however, especially at this very moment, with many states continuing to consider expanding their Medicaid programs under Obamacare and many willing to do so only if they can hide the corresponding costs from their constituents.

There is currently legislation before Congress, H.R. 1400, sponsored by Rep. Morgan Griffith, R-Va., that would begin to crack down on Medicaid provider taxes. Congress needs to do much more, but Griffith’s bill would be a good start toward showing states that Congress has this gimmick in its crosshairs—a gimmick being massively exploited by Obamacare.

Congress’ recent effort to repeal Obamacare’s Medicaid expansion as part of its reconciliation bill was a big first step toward showing states that federal support for their Medicaid largess is limited at best.

Until Obamacare is fully repealed, Congress can go farther by sharply reducing Obamacare’s enhanced match rate, which has the unfortunate combination of being both unaffordable and grossly unequal, providing greater support toward able-bodied childless adults (including some prisoners) than for the truly needy.

But one clearly bipartisan thing Congress should strive to achieve over the next year would be to end the Medicaid provider tax gimmick, thus granting more transparency and accountability into states’ decision on whether or not to expand their Medicaid programs.