By One Measure, 95.5 Million Are Dependent on the Federal Government 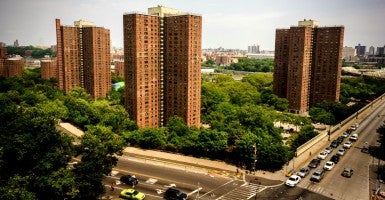 How many people are dependent on the federal government? That’s a hard nut to crack. Counting people who rely on the government to sustain their lifestyles is more complicated than simply counting up the number of dependency program enrollees. If you did that, people on the rolls of more than one program at a time would be over counted.

However, it is possible to track the growth of government dependents over time. This can be done by tracking the number of people in the same programs year over year. To get the trend for overall government dependents, several programs that have minimum overlap in recipients can be added together and tracked. These programs target widely different populations: the earned income tax credit aids working families; Pell Grants, college age dependents; and OASDI, for the most part senior citizens. So there is likely to be little overlap. In 2013, 95.46 million people were enrolled in these three programs—30.16 percent of the U.S. population.

This obviously is only a rough calculation, but any double counting of people who, for example, are on OASDI and also have Pell grants should be more than balanced by people who are dependent on other programs like food stamps or subsidized housing, but are not on one of the counted programs.

In fact, Robert Rector and Rachel Sheffield of The Heritage Foundation have concluded that when counting all of the over 80 means-tested welfare programs that provide cash, food, housing, medical care, and targeted services to poor and low-income Americans, the number of government dependents tops 100 million individuals—nearly one in three Americans.

As the chart shows, the federal government’s welfare system is fostering dependency at an alarming rate. The number of people dependent on three big government programs has grown from less than 80 million to over 95 million in just six years. This as the federal government runs up the national debt with a credit card backed by future earnings of today’s children and by those not yet born.

The national debt stands at $18.8 trillion, $8.2 trillion more than the $10.6 trillion it was when President Barack Obama was elected. That’s not investing in the future, that’s kicking an $18.8 trillion can down the road to the next generation’s doors.

The next time a politician promises one more “free” government benefit, the “Me Generation” should remember that they are living on borrowed time and borrowed money.