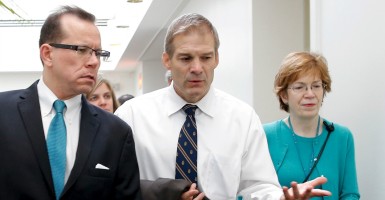 House conservatives are no fans of the budget deal. (Photo: Jonathan Ernst/Reuters/Newscom)

“Sadly, this bill does not adequately address the security issue, nor does it have the common sense, widely-supported pro-life riders that we suggested,” said Rep. Jim Jordan, an Ohio Republican and chairman of the House Freedom Caucus, in a statement.

Without a rider to curb Syrian refugees, Rep. Dave Brat, R-Va., called the omnibus  “a total disaster from a national security perspective.”

“I think the more riders that could have been added, the more you would’ve peeled Freedom Caucus members to support the bill,” he speculated.

At a Wednesday press conference, House Speaker Paul Ryan, R-Wis., tried to soothe frustration, saying that “in a divided government, no one gets exactly what they want.” But the speaker trumpeted the deal as “a big win for our manufacturers and for our foreign policy.”

Across the aisle in the Senate, Majority Leader Harry Reid, D-Nev., said the deal “isn’t perfect” but called the legislation “a good product for the American people.”

Democrats were able to cite the absence of more than 150 proposed policy riders they opposed, including provisions to restrict the Syrian refugee program, cut funding for President Barack Obama’s executive immigration action, and defund Planned Parenthood.

Conservative members of the House say they’re likely to split their vote—backing the tax extenders package,which renews billions of tax breaks for both businesses and lower-income Americans, and opposing the omnibus.

Many voiced support for the extenders bill, characterizing the extenders as necessary and growth-oriented. They balk, though, at an omnibus bill that increases spending and doesn’t include any of their proposed policy riders.

But Brat and Fleming, like many members of the House Freedom Caucus, don’t blame Ryan for a bill that doesn’t live up to their expectations.

“Overall on process, Ryan get high marks,” Brat said, “but the product here is an F.”

After just six weeks on the job as speaker, Ryan had to hammer out a deal to fund the government and avoid a shutdown. As budget deadlines loomed, the speaker sought and fielded input from rank-and-file members.

And Brat says his colleagues understand that “this deal is not Paul Ryan’s baby.”

“This was a disaster that accumulated over a full year of not following regular order. Ryan just came in 6 weeks ago and had to be the coach while we cleaned the barn.”

Pointing to next year’s schedule, Brat says Ryan “has kept his word” by taking steps to begin the process earlier next year.

“The evidence for that is that next year, he’s already put the calendar on the table. He’s serious about regular order and getting our House product complete.”