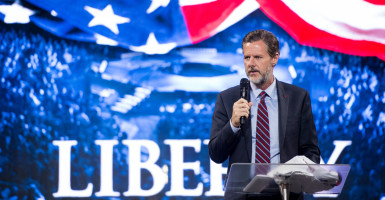 A revision to Liberty University’s weapons policy will allow concealed carrying of firearms in dorms—the only area on campus where concealed carry wasn’t already permitted.

Liberty President Jerry Falwell Jr. said students of the Christian university in Lynchburg, Va., will be required to have a concealed carry permit and obtain approval from the university’s police department. He announced the change during Wednesday’s convocation.

“As the president of this university community of nearly 15,000 students and 7,000 faculty and staff, I take very seriously my responsibility to keep you safe in an increasingly dangerous world,” Falwell said.

The revision is consistent with Falwell’s remarks during the university’s previous convocation, on Dec. 4, in which he encouraged students 21 and older to carry guns for self-defense in light of the terrorist attacks in San Bernardino, Calif., and around the world.

“I just want to take this opportunity to encourage all of you to get your permit,” Falwell said. “We offer a free course [in firearms safety]. Let’s teach them a lesson if they ever show up here.”

Those remarks sparked some controversy in the media, and the university issued a statement of clarification supporting Falwell’s comments and the reasoning behind them:

His remarks were a call to arms for self-defense and a criticism of political leaders who see the answer to such tragedies as more gun control. More gun control leads to more places and circumstances where innocents are unarmed and unable to defend themselves.

The statement also explains the reason for the university’s initial change in weapons policy in 2011, which allowed for concealed carry on campus with the exception of residence halls:

Liberty University’s policy of allowing students, faculty, and staff to carry weapons on campus was as a result of a school shooting at Virginia Tech, about an hour from Liberty’s campus. Other convocation remarks by President Falwell after similar tragedies further underscore our belief that we should exercise our Second Amendment rights to protect ourselves in the event something similar should occur on our campus.