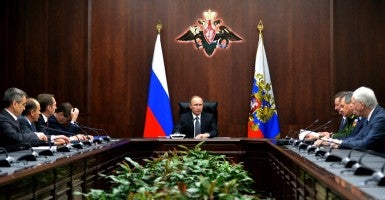 Rose Gottemoeller and Brian McKeon, two high-level administration officials dealing with arms control issues, testified earlier this month before a joint hearing of the House Armed Services and Foreign Affairs Committees on how the Obama administration is responding to Russia’s INF Treaty violations.

Despite extended questioning, committee members failed to elicit specifics from the administration officials on what they were doing beyond imploring Russia to return to compliance and stepping up a U.S. defense presence in Eastern Europe.

The administration’s actions, such as they are, have thus far proven ineffective. In the face of U.S. pleading, Russia refuses to even acknowledge the existence of the offending missile, let alone take steps to return to compliance with the treaty.

Arms control violations are becoming routine for Russia. As Gottemoeller testified in a 2014 hearing on the same topic, the administration is concerned about possible Russian violations of several treaties, including the Conventional Forces in Europe Treaty and the Biological Weapons Convention.

As Russia’s brazen violations make clear, the INF Treaty has outlived its strategic utility to the United States. The U.S. should withdraw from the treaty. There is no reason for the U.S. to limit its own nuclear options while Russia clearly does not consider itself bound by the treaty. Doing so would be to effectively invite Russia to gain an advantage across an entire class of weapons.

The INF Treaty also precludes the U.S.’s thinking strategically about intermediate-range weapons, in much the same way the 1922 Washington Naval Treaty limited U.S. knowledge of aircraft carriers prior to World War II.

[T]he INF Treaty has limited U.S. institutional knowledge of the role of ground-launched intermediate-range ballistic missiles in the U.S. defense posture. The United States has given little or no thought to integrating intermediate-range systems into its force posture since the INF Treaty was signed—despite the aggressive rise of China and threats from rogue states.

In addition to withdrawing from the INF Treaty, the U.S. should also step up its nuclear modernization efforts, which pale in comparison to Russia’s.

Not only is Russia undertaking extensive nuclear modernization programs, but its leaders are signaling an increased willingness to use nuclear weapons and have made several nuclear threats against NATO members.

“[T]hese reckless comments cause us to wonder whether Russia continues to respect the profound caution that world leaders in the nuclear age have shown with regard to the brandishing of nuclear weapons or nuclear-inspired rhetoric.”