‘Green’ Cronyism Is on Full Display In Paris 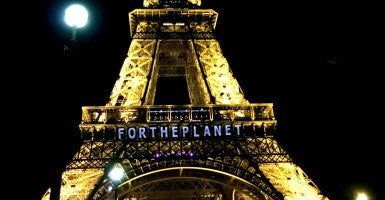 PARIS–Cronyism is on display here at the United Nations climate conference (COP21), as developing countries aren’t the only ones trying to cash in on carbon regulations.

The conference is full of exhibitors showcasing their carbon cutting technologies–each of which would benefit greatly from taxing carbon or forcing commitments to reduce greenhouse gas emissions.

The general conference arena contains rooms filled with vendors demonstrating how their business is reducing mankind’s carbon footprint. They include:

The list is certainly exhaustive. The problem with all of them, however, is that they’re in Paris pushing for special privileges that will help their businesses at the expense of their competitors and at the expense of a competitive free market.

It doesn’t matter what policies are advocated for – subsidies for carbon free energy technologies, a Green Climate Fund that finances green projects in developing countries, regulations that restrict the use of carbon-emitting natural resources or a carbon tax – those with special connections will benefit and the costs will be dispersed among the rest of us.

These are policies that will cost American households and businesses – at least those businesses not connected to politicians and bureaucrats – leading to lower levels of output, income and employment.

Because more than 80 percent of America and the world’s energy needs are met through carbon-emitting conventional fuels like natural gas and coal, reducing CO2 emissions will increase energy prices and force consumers to use less.

In addition to the direct budget impact of higher costs for electricity, gasoline, heating oil, and natural gas, higher energy costs force cutbacks in both the production and consumption of all goods and services because energy is a staple input for the economy. The ultimate result is economic retraction and a reduction in living standards.

Crony policies that favor the well connected do more harm than the direct higher prices we pay. They harm competition and skew how markets should work. Businesses can and should take advantage of emerging markets and innovate to provide products people want.

That’s not what’s going on in Paris.

There also have been calls for energy policy reform and energy subsidy reform here in Paris, but even those calls are off base. They continue to get it wrong by calling for the end to subsidies for conventional resources like oil, coal and natural gas and pouring more money into intermittent, expensive renewable energy sources like wind and solar.

True policy and subsidy reform would eliminate preferential treatment for all energy sources and technologies and get the federal government and international bodies like the United Nations out of the energy businesses altogether.

The world has a diverse mix of energy producers and suppliers and the demand for affordable and reliable electricity and transportation fuel isn’t going anywhere any time soon. They don’t need help; they need bureaucrats to get out of the way. Only then will we eliminate cronyism in energy policy, encourage innovation, and have the resources to protect the environment.