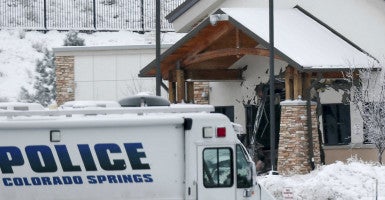 'We honor all life, including the victims of this tragedy,' Father Bill Carmody says. 'Our actions must show that we value all life—born and unborn.' (Photo: Stringer/Reuters/Newscom)

A Catholic priest in Colorado Springs, Colo., says he is determined to show that the pro-life movement values all life—including the lives of those who work in abortion clinics.

Father Bill Carmody is director of the Respect Life Office run by the Diocese of Colorado Springs. He has protested abortion outside the Planned Parenthood clinic in Colorado Springs for several years.

In an interview with The Daily Signal, Carmody, 57, said he was part of a protest outside the clinic the day a man opened fire at the facility. The pro-life protesters had left before the shooting started.

As soon as he heard about the shootings, Carmody said, he called Planned Parenthood’s security guard to make sure he and the clinic staff were all right.

“I called J.C. to make sure he was OK,” the priest said, adding that he and the guard are “very friendly.”

“It’s my hope and prayer he gets out of the business,” Carmody said. “He’s a good man; he just has a blind spot on this issue. Most people who work at Planned Parenthood are good; they just have a blind spot.”

At a prayer vigil following the shooting, Carmody said, he spoke with Vicki Cowart, president and CEO of Planned Parenthood of the Rocky Mountains.

The priest criticized the “rush to politicize the tragedy.” He said:

Blaming pro-lifers, you know, five minutes after it happened was so tacky. We don’t even know all the facts yet. I purposely was silent, trying to be respectful of the families who lost people. Let them grieve.

Carmody said it’s important for those in the pro-life movement to “live your life showing that you value life.”

“Pro-choicers want me to be mean,” Carmody said, adding:

They want me to yell and scream because that’s the stereotype. But we want their conversion [to a pro-life position]. We honor all life, including the victims of this tragedy. Our actions speak louder than our words. Our actions must show that we value all life—born and unborn.

Police said gunman Robert Dear, 57, took the lives of three, including a police officer, and wounded nine others at the Colorado Springs clinic Nov. 27. He surrendered from inside the Planned Parenthood clinic after a standoff that lasted about five hours.

The Associated Press reported that Dear made a comment about “baby parts,” but the remark was “among a number of statements [he] made to authorities after his arrest,” making it difficult to ascertain “his specific motivation.”

In the pro-life group’s fourth video, Dr. Savita Ginde, vice president and medical director of Planned Parenthood of the Rocky Mountains, tells actors portraying buyers from a human biologics company: “I think a per-item thing works a little better, just because we can see how much we can get out of it.”

David Daleiden, founder of the Center for Medical Progress, was among pro-life activists who condemned the violence that occurred the day after Thanksgiving. He said:

The Center for Medical Progress condemns the barbaric killing spree in Colorado Springs by a violent madman. We applaud the heroic efforts of law enforcement to stop the violence quickly and rescue the victims, and our thoughts and prayers are with the wounded, the lost, and their families.